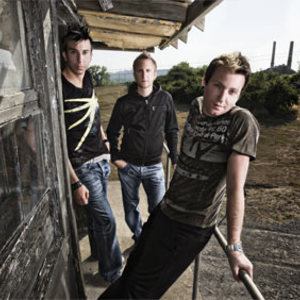 Thousand Foot Krutch is a Canadian alternative band formed in 1997, currently composed of Trevor McNevan (vocals), Steve Augustine (drums), Joel Bruyere (bass) and Ty Dietzler (touring guitarist), all of whom are Christians. McNevan and Augustine are also in FM Static; Joel Bruyere, has also started his own side project, entitled The Drawing Room; also McNevan has contributed guest vocals with Three Days Grace, Falling Up, Worth Dying For, KJ-52, Demon Hunter, Hawk Nelson and Manafest.

Their first album, Shutterbug, was released in 1995. Neil Sanderson (drums), also played in Groundswell (the first version of Three Days Grace). Bands spend a lot of time together and even worked at McDonald's.

The second album, (that was first under the name Thousand Foot Krutch) That's What People Do was released independently in 1998 and is out of print. It sold over 5000 copies. TFK climbed the ladder of local notoriety throughout Ontario and abroad. Reaching the ears of Ontario commercial radio, CKWF 101.5 FM in their home town of Peterborough took a chance and added "Rhyme Animal", the band's first single from their independent recording, to their rotation. It clicked with listeners and within two months ended up being one of the five most requested songs of the year. In 1999 TFK was chosen by 7 Ball Magazine as one of the top 25 indie bands in North America. They were also awarded "Best Indie Recording" and Trevor awarded "Vocalist of the Year" by the readers of The Wire Magazine. They were then awarded "Band of the Year" at the 2000 Wire Awards. They were also voted as the #1 band of the millennium on 100.3 FM in Barrie, Ontario.

The next album, Set It Off, was released at November 14th 2000. It was debut label release. The sound of the album was distinct in its heavily hip-hop influenced nu metal, and though a few songs from the record (including "Puppet" and "Supafly") impacted at both Secular and Christian radio, the band gained notoriety almost entirely through self-promotion and word of mouth. The band also printed a limited edition "Pre-release" version of "Set It Off" at a release party in Peterborough, Ontario for their local fans. TFK toured with Finger Eleven, Econoline Crush, Treble Charger, The Tea Party, Matthew Good Band, Gob, Zuckerbaby, Clarknova, supergarage and others. Three Days Grace, which was a cover band at that time, was a TFK's opening band. Trevor helped with recordings of Three Days Grace's demo album. He is also featured on their song "This Movie" from this album.

In 2003, TFK signed with Seattle-based Tooth & Nail Records after long consideration and released their critically-acclaimed second full-length CD, Phenomenon. Though something of a departure from the rap-heavy sound of Set it Off, Phenomenon still relied on McNevan's rhythmic vocals, albeit with a solid modern metal sound. Phenomenon was well received, and spawned 4 popular radio singles, including the anthemic "Rawkfist." The CD sold 200,000 units[1] making it one of the best-selling albums in Tooth & Nail's history. They continued this success with the 2004 re-release of Set it Off through Tooth & Nail, allowing for a larger print run and adding 6 songs, including five from "That's What People Do", and one new song "Everyone Like Me", produced by Gavin Brown (Three Days Grace/Billy Talent/Thornley). In that time McNevan and Augustine started a side band called FM Static, which can be classified as a pop-punk or pop/rock band and is usually much more light-hearted. FM Static scoring two #10 hits for their songs "Crazy Mary", and "Something to Believe in."

On July 19, 2005, they released their third full-length album The Art of Breaking, produced by Arnold Lanni (Our Lady Peace/Finger Eleven/Simple Plan). This album makes almost a complete break from the nu metal sound of their earlier albums, focusing more on hardcore elements. The single "Move" peaked at #16 on the Billboard Mainstream Rock chart early 2006. The band was on many tours, festivals and concerts, including concerts with Korn, Paramore, Relient K, AFI, Yeah Yeah Yeahs, Hawthorne Heights, Dashboard Confessional, Neverending White Lights, Kill Hannah, Trapt, Thornley and others.

After working in the studio with producer Ken Andrews (Beck/Chris Cornell/Pete Yorn/Tenacious D/Mae) they released The Flame in All of Us on September 18th, 2007. This album could be considered a slight deviation from their previous rapcore inspired sound, with a move to a more mainstream rock sound, with some heavy influences from bands such as fellow Canadian artists Our Lady Peace & other various metal bands. On Purevolume.com Thousand Foot Krutch was the favorite artist on the 2nd of July 2007 and 26th August 2007.

The next tour was in the spring of 2008 when the band toured with Skillet and Decyfer Down. TFK also perfomed with Egypt Central, P.O.D., Chevelle, Sevendust, 10 Years, Daughtry, Red.

The End Is Where We Begin