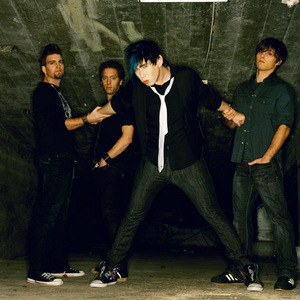 Marianas Trench is a Juno award nominated Canadian pop rock band from Vancouver, British Columbia, Canada signed to 604 Records. The band was formed in 2001 and released their first full length album Fix Me on October 3, 2006. Some of the demos the band sent out four years before appear on the album. The band says their biggest musical influences are Queen, Foo Fighters, The Beach Boys and Ben Folds Five.

It takes some real cojones to include the word 'Masterpiece' in your album title, but Josh Ramsay isn't too worried. "I suppose I could be digging myself into a hole calling the record Masterpiece Theatre," he chuckles, "but it's tongue-in-cheek. And I'm not the kind of person that people would assume as being an egomaniac. I hope not, anyway."

Given his feverish imagination and comprehensive musical gifts, Ramsay could probably get away with a little egomania. And with the release of Masterpiece Theatre, the frontman of Vancouver's Marianas Trench makes a iron-clad case for a prodigious set of talents - both his own and those of his bandmates, guitarist Matt Webb, bassist Mike Ayley, and drummer Ian Casselman.

Marianas Trench had already elevated itself above the rest of the pack with a 2006 debut, Fix Me, that showcased a knack for colouring outside the lines of factory-issue millenial punk, shrewdly-built pop, and super-adrenalized modern rock. The single and in particular the video "Shake Tramp" was enough to demonstrate these qualities, coupled with Ramsay's uninhibited urge to be the complete song-and-dance man.

But with both the industry and the fans beating down the door for a quick second album, the Trench decided to put on the brakes. "All of a sudden you have six months to do your next record," Ramsay sighs. "So I really had to just put my foot down and say, 'No, I need the time to do this.' I was not interested in putting something out for the sake of putting something out."

Two years later, Marianas Trench has re-emerged with Masterpiece Theatre. And not surprisingly, it's a work of soaring ambition and decisive technical prowess ? that easily might not have happened. "It's one thing when you're Chad Kroeger and you just finished writing 'How You Remind Me'," Ramsay states. "I didn't have some mega-platinum song to back up my argument with, so I was lucky that the band and the label trusted me enough to do it."

By "it", Ramsay means he was allowed to indulge a high-concept fantasy for the band's sophomore album, which is built, for starters, around a song called "Masterpiece Theatre". Adopting Brian Wilson's notion of the 'pocket symphony' and then running with it, the three distinct versions of ?Masterpiece Theatre? dotted across the record feature an almost perfect balance between the vocal theatrics of Queen and the more hymnal qualities of the Beach Boys.

By the time ?Masterpiece Theatre? is reprised for a final, climactic time, every other song on the album is quoted and incorporated into an intricately constructed dramatic revue that swings from pristine pop, to propulsive riff rock, to quasi-doo wop, to robotic new wave, and finally into a wholly satisfying thematic payoff.

"You know in the climax of a musical, there's always that medley at the end, and I thought that would be cool on a rock record," explains Ramsay, "but it turned out to be a lot harder than I thought it would be. I wrote it in the studio as we recorded it, and it took about three weeks."

After a beat, he adds, "But really it took me two years because it draws from all the songs on the whole album."

Bassist Mike Ayley readily admits, "I don't think any of the three ?Masterpiece Theatre' songs could have gone on Fix Me had they been written at the time. ?Masterpiece' 2 and 3 in particular are amazing songs that really explore the potential of Josh's writing. You really have to hear them to get it. It's like trying to explain ?Bohemian Rhapsody' to somebody who has only heard Kanye West and Katy Perry."

Ramsay agrees. "I really wanted to have a 'Good Vibrations'/'Bohemian Rhapsody' style song on the first record,? he says, ?but I don't think I was a mature enough writer to have written it yet, and I still feel like I was in over-my-head when we did this one, and I just barely made it."

Ramsay is unnecessarily modest; the whole of Masterpiece Theatre demonstrates a startling compositional maturity compared to the Marianas Trench of two years ago.

"Beside You" is a panoramic exercise in big emotions, with a dash of the Dream Academy's "Life In a Northern Town?. "Acadia" begins with a clipped, bright acoustic guitar, and blossoms into something like the Who reconsidered by U2, reimagined for the net generation. In the crunchy "All to Myself", the power ballad "Lover Dearest", and the strident "Good to You" (in which he duets with Kate Voegele), Ramsay pulls out the kind of honeyed vocals more attuned to modern RnB than white, adolescent rock.

"I always had that aspect in my voice but the first record just didn't have songs that were conducive to me singing that way," he states. "I think it's from growing up listening to a lot of Michael Jackson. With these songs, it made sense to stretch out a little more."

On "Cross My Heart" and "Celebrity Status", the band conjures up a kind of perfect pop crossover. Producer Dave 'Rave' Ogilvie was responsible for the latter track, which cops a move he used on Marilyn Manson's "Beautiful People" with three drummers (Casselman, Ramsay and Shane Wilson) playing at once - much to Ramsay's delight. "He's just worked with so many great artists which makes his well of tricks and ideas so vast," he says.

True to Ramsay's quest for "more diversity on this album" - not to mention the indulgence of his record label - Rave was just one of four prominent guest producers eventually roped into Masterpiece Theatre. Their collective resume includes Nine Inch Nails, Sum 41, Iggy Pop, Avril Lavigne, and Hedley among others.

"I feel really fortunate to have worked with all those guys," Ramsay says, "coz they all bring really unique things. Dave Genn and I have a really good working relationship with each other, and he has such a unique style with arrangement and stuff. Greig Nori was a really pleasant surprise. As far as I can tell, he wanted to work with us because he liked our video. The whole time he was just trying to get me to dance around like an idiot. And Raine Maida, man? Raine's a trip!"

Bassist Ayley also credits Maida for encouraging the band to ?find a personality-identity that wasn't as evident when we started the production process," while also praising Ramsay for his production efforts. Ramsay took charge of four songs on the finished record. ?Josh is really about capturing the emotion and power which isn't surprising considering all the feeling in the writing,? he says.

Oddly enough, Ramsay also wanted Disney's in-house genius Alan (Little Mermaid) Mencken to twiddle the knobs for the climactic version of "Masterpiece Theatre", but admits, "it's a pretty tall order to get an Academy Award winner to come and work on your record."

Still, the album is certainly not diminished by the few things Ramsay didn't get. And once the world gets a load of this Masterpiece, Mencken, Pharrell Williams, Phil Spector... you name it. They'll probably be lining up.

Something Old / Something New (EP)