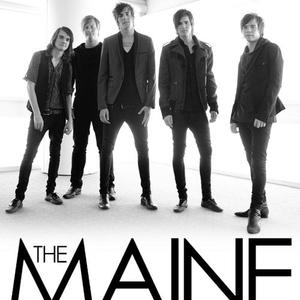 Graduating from high school early is nothing for a band when you have already graduated from the school of rock with honors. The Maine have taken no classes, were given no grades, and had no teachers. Hailing from Tempe, AZ, all they had was a gut feeling that the music they were playing rocked and inspired kids nationwide. The Maine released their first label EP, The Way We Talk on December 11, 2007.

The Maine formed in January of 2007. After junior year, when most students look forward to slacking off as seniors, The Maine asked two members to graduate early so that they could share their music with the rest of the world. You see, seven periods a day is just seven periods too long for The Maine, who can't wait to get home and write more tunes. Bassist Garrett Nickelsen stated honestly, "School has never really been number one for me, I have always tried to focus on the band so I'm ready to really get this band going." Now, already juggling music video shoots, recording sessions, and concerts, The Maine actually had the ink dry on their record contract before it dries on their diploma.

The Maine started when Pat and Garrett were sick of jumping from garage band to garage band and wanted to take their unique vision of what music should be to the big time. John, Kennedy and Jared all had similar ideas and the band knew they had the final line up as the hits and lyrics kept writing themselves. The Maine didn't want to continue in the screamo trend that they felt was swallowing their local music scene. They wanted to create a new sound and began drawing influences from 90's radio alternative bands. Meshing styles like indie, pop and rock can sound forced, often imitating other bands without a hint of originality, but for The Maine mixing a wide variety of genres just sounds natural. Every Maine song begs for an immediate repeat.

After gathering a huge following through MySpace, The Maine played their first show in front of over 600 fans, acquired solely through word of mouth and this social networking site. Scouts from almost every major and indie record label were present waiting in line to sign them after their jaw dropping performance. Jared loves every minute on stage, "Playing live is the reason we exist. The energy that we feel on stage is usually a result of what we are feeling from our fans. It's just us conveying our experiences and feelings through our presence, and thriving off of the response we get. Garrett adds to our performance, he has a strong way of communicating with the crowd. When we see Garret going crazy it reminds us all of why we love what we do." The Maine's amazing live performances caught the eye of Fearless Records (Plain White T's, Sugarcult, Mayday Parade) and booking agent Matt Galle (My Chemical Romance, Boys Like Girls and HelloGoodbye.)

They spent the Summer of 2008 as the opening band on the Soundtrack of Your Summer, tour alongside co-headliners Boys Like Girls and Good Charlotte, and Metro Station. The band spent time from September 13 to September 21 on tour with The Academy Is... and We The Kings in the UK.

The Maine released their debut music video with the single "Everything I Ask For" on November 13, 2008 on MTVU.

The Maine released their Christmas EP "...And A Happy New Year" on December 9, 2008. Songs on the EP include a cover of WHAM!'s Last Christmas and a newly recorded version of the song "Ho Ho Hopefully", which, on first release featured Brighten, and the new version was recorded with Eisley and backup vocals of Lights. The music video for "Ho Ho Hopefully" features Justin Richards of Brighten.

They performed on "The Secret Valentine" tour with We The Kings, The Cab, There For Tomorrow, and VersaEmerge from February 6, 2009 to March 4, 2009.

The Maine was on the "Alternative Press Tour" (more commonly known as the AP Tour) and co-headlined with 3OH!3 and Family Force 5. The two opening acts were Hit The Lights and A Rocket To The Moon, and they toured from March 20, 2009 to May 9, 2009.