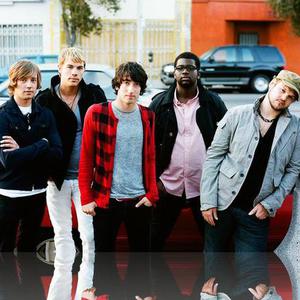 Plain White T's are a pop-punk band formed in 1997 in Illinois, United States. They are best known for "Hey There Delilah", an acoustic song performed solely by singer Tom Higgenson originally released in 2005 and later hit #1 in the US in 2007. For over a decade, Plain White T's have been playing to packed audiences craving for that perfect pop-punk punch. Their journey, which began in a small suburban basement playing covers, has taken the band to Warped Tour three times, and landed them opening slots for bands like Jimmy Eat World and AFI.

For over a decade, Plain White T's have been playing to packed audiences craving for that perfect pop-punk punch. Their journey, which began in a small suburban basement playing covers, has taken the band to Warped Tour three times, and landed them opening slots for bands like Jimmy Eat World and AFI. Plain White T's are road warriors in the truest sense and with their first major label album, Every Second Counts, the band is ready to rock in a big way.

PWT's story started back in high school, when frontman Tom Higgenson first stepped into Chicago's famed rock club the Metro and saw his future on the stage. With the local music scene exploding nationally courtesy of bands like Smashing Pumpkins and Veruca Salt, he decided the time was ripe for his own dreams to be realized. Armed with paper, pen, and guitar, Tom went to task, experimenting with lyrics and melodies on a four-track in his parents' Villa Park, Illinois home. Once he'd reached a level of comfort with his songwriting, he worked up the courage to hand off a tape to Christian Lane, singer of 90's buzz band Loud Lucy, and to his surprise, Christian actually listened to it.

Once he'd recruited a group of school pals, including guitarist Dave Tirio, it was only a matter of a couple years before Plain White T's, who'd attracted a loyal following thanks to Tom's ridiculously melodic tales of teen angst and loveless nights, were playing the Metro themselves.

The music industry took notice of that success and after selling thousands of copies of their self-released 2002 debut, Stop, PWT's were picked up by Fearless Records who re-issued the album along with 2005's All That We Needed. But it was their heartfelt, acoustic-tinged "Hey There Delilah" that cemented their status as potential hitmakers.

Tom's songwriting evolved after the success of the romantically frank "Delilah," which really was a departure for a band known for their energetic powerpop. On Hollywood Records debut, Every Second Counts, Tom, along with bandmates Mike Retondo (bass and vocals), De'Mar Hamilton (drums), and Tim Lopez (guitar, vocals), continues to turn the personal into the universal. Throughout the album, he sings of hook-ups and break-ups and the emotional rollercoaster in between. A prime example is lead single "Hate (I Really Don't Like You)." In a similar vein, the lyrics for "Friends Don't Let Friends Dial Drunk" also showcases Tom's offbeat take on love and life, while its melody sucks you in with every turn of phrase. Delving slightly deeper into emotional territory are upbeat tracks like "Our Time Now" and "Come Back to Me" as well as one of the album's quieter numbers, "Write You a Song."

Land Of The Living (CDS)

Wonders of the Younger