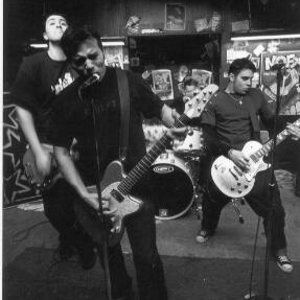 Will Salazar (vocals) Adam Lewis (bass) Chris Lewis (guitar)... San Diego, CA based pop punk / alternative rock band which features only two members of the founding lineup. Chris Lewis from Will's other band, Denver Harbor has taken Damon's spot on guitar. Full Bio: Houston, we have a problem. It looks like FenixTX is breaking wide open... again! Fenix tx (formerly known as Riverfenix) came together on the north side of Houston in the balmy southern autumn of 1995.

Houston, we have a problem. It looks like FenixTX is breaking wide open... again! Fenix tx (formerly known as Riverfenix) came together on the north side of Houston in the balmy southern autumn of 1995. In search of a life bigger and better than a job at the local Gunspoint Mall, and being -- quite frankly -- bored out of their minds, the original three members decided to avoid the path that so many of their ghetto neighbors had followed. Leaving a life on the stoop behind, they picked up instruments and started a band. The droves of girls that followed were just a perk.
That audience continued to grow when FenixTX moved their operation to sunny San Diego, where they drew the attention of manager Mark Hoppus and the Tahoe Agency, who began booking FenixTX on large tours across America and Canada playing with such acts as Blink 182, Unwritten Law, Buck-o-Nine, Reel Big Fish, and even one memorable show with 80's icons Duran Duran.

With the single "Speechless" in full rotation on L.A.'s KROQ, FenixTX merged their association with indie label Drive Thru Records together with MCA, subsequently remixed and rereleased their first album along with two new previously unreleased songs. Most of the record was produced, engineered and mixed by Jim Barnes, with most tracks on the Drive-Thru/MCA Records re-release remixed by Jerry Finn (Blink-182, Green Day). Ryan Greene (NOFX, Lagwagon) also recorded and mixed two new songs, "Flight 601 (All I've Got Is Time)" and "Surf Song." With a "new" album came a new name. Looking to leave behind the clean and drug-free image of their former namesake, and also to avoid a lawsuit with the mother of the real River Phoenix, Riverfenix became FenixTX, paying homage to the state that spawned them.

The re-released album, now simply titled FenixTX, covers a lot of bases. From the opening chords of "Speechless" to the album's glorious cock rock guitar solo played by guest axe-man Ro Sahebi, FenixTX is the musical equivalent of the Texas chainsaw massacre, only slightly less bloody and a lot more fun. The band sings about normal things from everyday life, including multiple alcohol induced stomach-pumpings at the E.R. ("Apple Pie Cowboy Toothpaste"), presidential assassinations ("Minimum Wage"), and wasting your girlfriend's step-father with a Louisville Slugger ("G.B.O.H.").

Five years later... FenixTX returned with LECHUZA, the band's long-awaited sophomore release five years later. With LECHUZA, the band returned this time with a harder-hitting, heavier sound that is sure to surprise anyone who thought they had the band pegged. Tracks like "Threesome" and "Abbazabba," already live show favorites, vault the band past their earlier pop-punk acclaim into the arena of true rock and roll glory. Still, anyone who loved the band's trademark glibness need not fear. Tracks like "Phoebe Cates," an ode to the goddess of Fast Times at Ridgemont High will definitely please long-time fans who love the band's sense of bawdy humor (or else just make Ms. Cates angry enough to threaten a lawsuit).

Whatever the formula behind the music, FenixTX are undeniably more than what appears on the surface. The question is, if you find yourself some night walking alone along a dark, deserted street, with nothing to keep you company but the FenixTX song you have stuck in your head - will you have you courage enough to brave the horror that may come your way if you dare to whistle along....?