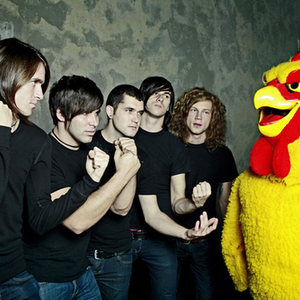 Why get up in the morning to work at Taco Bell when you could be traveling the continental US pushing your band's fresh new sound to people near and far? Precisely the philosophy of five guys from Tallahassee, FL. Derek, Jeremy, Alex, Brooks and Jake, thinking outside the bun, decided to all quit their jobs and perform in a parade. Mayday Parade was born in 2005 when two popular Tallahassee bands, Kid Named Chicago and Defining Moment, decided to merge and form one group. Both bands had been friends for a long time but they each seemed to have different kind of holdups.

Mayday Parade was born in 2005 when two popular Tallahassee bands, Kid Named Chicago and Defining Moment, decided to merge and form one group. Both bands had been friends for a long time but they each seemed to have different kind of holdups. They pooled their resources, booted out the undedicated members and decided to take the good from each band and move forward. Armed with a dynamic lead singer Derek Sanders of Defining Moment, Mayday Parade explodes with energy and personality. Fans of both bands came together in support of the Parade and it wasn't long until thousands of other new fans got into the action. Mayday Parade knew they'd have to start at the grassroots level and began to work themselves to the top. Through their catchy tunes and fun attitude, they have hooked fans at their shows and online with an interactive MySpace selling 10,000 EPs without label support.

With the work hard, play hard, do whatever it takes to spread your music philosophy that most young bands need to have these days, the band took to the road and started winning over kids not just in Florida, but across the country. Mayday Parade was consistently in the top 30 unsigned artists on MySpace. They've consolidated over 50,000 friends and growing and have totaled over 2.4 Million plays. With labels hot on their tail, Mayday Parade decided that Fearless Records was the one for them and signed at the end of the summer 2006.

They then released their first professional record, A Lesson In Romantics, in 2007. Shortly after, one of the lead singers/vocalist Jason Lancaster ( lead guitarist/vocalist of Kid Named Chicago) left the band over a songwriting dispute. He then started his own band, Go Radio. There are no hard feelings between the two bands, although Lancaster later commented, "I wish it could have gone down differently."

In 2009, the band released their second album and first without Lancaster, Anywhere But Here.

Mayday Parade's live show also conveys their personality by assuring that they are intensely full of life. The band knows how to put on an engaging show with five energetic members. There's no escaping the energy that Mayday Parade brings. They're all over the stage, making sure the audience goes home happy and wanting more. They love to get the crowd engaged!

In 2011, the band released their third, self titled album.

What It Means To Fall Apart

Monsters In The Closet