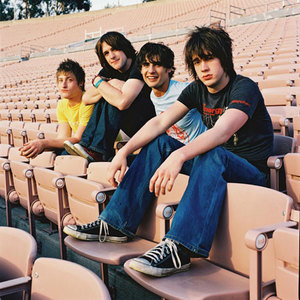 The All-American Rejects are a rock band that formed in Stillwater, Oklahoma, United States in the late 1990s by high school friends Tyson Ritter (on vocals, bass, piano) and Nick Wheeler (lead guitar, vocals and keys). Other current members are Chris Gaylor (on drums and percussion) and Mike Kennerty (rhythm guitar and vocals). They released their first independent album in the spring of 2000, and eventually built up a large local fanbase.

In the summer of 2001, the Rejects released the EP Same Girl, New Songs and began to tour the American Midwest. By the tour's end, the band had signed a contract with Doghouse Records, the label of such bands as River City High and The Get Up Kids.

In 2002 the Rejects recorded their debut album. From this album came the single Swing, Swing for which the Rejects were first known. It got them a deal with DreamWorks, who picked up the album from Doghouse Records. Speaking with Songfacts in a 2012 interview, Nick Wheeler recalled: "We knew that was special, but we were on a little label that didn't really talk to radio or MTV, so there really wasn't talk of a single. Turns out it turned the heads of a lot of publishers and label people."

In 2005, The All-American Rejects released their new album, Move Along. This album features the song Dirty Little Secret, which was the first single. Their music video for the song features postcards from the book "Post Secret" by Frank Warren. The second release from the album was Move Along, recognised by its far from ordinary video, followed by It Ends Tonight which got some publicity from being featured on the third season of the MTV show, Laguna Beach. They also appeared in the TV series 'Smallville' where they played It Ends Tonight on the party of Lex Luthor. Before that, you also heard their songs Swing, Swing and Dirty Little Secret on the same show.

Top Of The World and It Ends Tonight (with a new acoustic version to "Laguna Beach" soundtrack) were the other two singles.

Top Of The World was also featured in the videogame "Burnout Revenge" and Night Drive from the same album is also in the soundtrack to the videogame "Cars".

The Album Move Along also made waves in Europe, where the album also featured 2 bonus tracks, and received a lot of publicity from the UK.

Beekeeper's Daughter was the first official single off The All-American Rejects' fourth studio album, Kids in the Street. The song will be premiered on the January 24, 2011 episode of the American teen drama 90210, when the band will perform it live at the re-launch of Liam's bar, the Offshore. It will be digitally released the same day. (Beekeeper's Daughter Songfacts)

Tyson Ritter took lessons in June of 2005 from renowned voice coach Linda Rabelstein to improve the high end of his vocal range. Critics have given the falsetto of Mike Kennerty rave reviews, hence Tyson Ritter's sudden interest in learning how to sing like a chorus soprano. There are rumors that the rest of the band are planning to also take lessons from Linda Rabelstein so that all four may make a harmony similar to the sirens in Homer's "The Oddessy". Hot Potato magazine critic Jan Ausfahren has called the venture "Risky" and "A recipe for disaster. Their male contingent certainly would not want to hear them sing like women."

Send Her To Heaven (EP)

Kids in the Street

When The World Comes Down (Deluxe Edition) CD2

When The World Comes Down (Deluxe Edition) CD1

When The World Comes Down (Best Buy Exclusive) CD2