Anatomy Of A Ghost 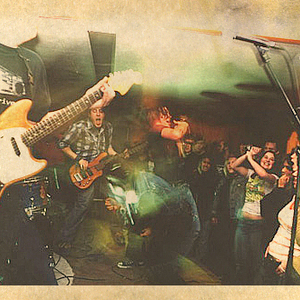 Anatomy of a Ghost, originally from Wasilla, Alaska, moved to Portland, Oregon where they gained notoriety. The Ghost recorded a full-length CD titled "Evanesce" for release May 2003. Anatomy Of A Ghost, while writing & recording creative progressive post-hardcore music, had developed a stage presence that is unparallel in the Pacific NW. Their shows began energetic and lively and had progressed into powerful, chaotic events that show goers talk about for days following the show.

Their music is difficult to categorize: there are quiet moments of profound beauty amid the ferocious hardcore attack, elements of sugary pop buried beneath walls of guitar, and progressive metal/punk that provides a roller coaster of sounds and emotions. The sound-track to a post-everything world. There is a washed-out chalk line between decay and beauty within their songs, both disturbing and comforting.
They have seen enormous global response from their pre-production demo tracks on mp3.com. 20,000 plays in 4 months has led to interviews with zines from Netherlands, Great Britain, and Germany.
Singer/lyricist John Gourley has crafted a lush, intelligent storyline that weaves a web of wounded alienation and inner turmoil throughout the songs. Every detail is noticed and all vulnerabilities exposed... a masterwork of inner dialogue. The rhythm section of drummer Nick Simon and bassist Zach Carothers provides the pulse for this musical landscape. They shift from an ugly, brute force to rolling grooves and back again before the listener has had a chance to catch a breath: an unsettling rhythm attack. And then the chaos. Guitarists Joe Simon and Dewey Halpaus destroy all preconceived notions of what guitar interplay can and should be.
Combining moments of haunting simplicity with waves of crushing noise, timeless, pop-inflected riffing, the listener is sucked into a wall of noise that is startling and unforgettable. Anatomy Of A Ghost is poised and destined to change minds about what rock and roll can and should be.

Anatomy Of A Ghost disbanded in 2004, but it's not completely over. John, Zach and Wes have a new project that they are working on called Portugal. The Man.


Other members went on to form The Burning Room.

One of Anatomy of a Ghost's songs was used, named after the band, in a torrent discography of Streetlight Manifesto. Possibly having something to do with their song, titled Streetlights, Empty Wells.