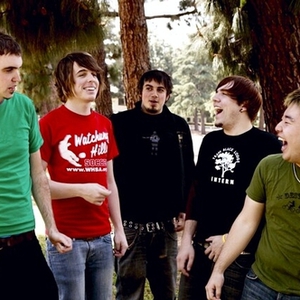 The name "Houston Calls", according to the band, is a combination of chapter titles from the Apollo 13 DVD. Other choices included "Zoltar Madness" (from Big), "Giant Green Insanity" (from The Toxic Avenger), and "Deeds in NY" (from Mr. Deeds).[1]
While they began performing live in June 2003, they soon released their 4 Song Sampler, produced by Hidden in Plain View's Rob Freeman, to help spread the word. Due to various national tours with bands such as Hidden in Plain View, The Academy Is... and Hellogoodbye, Houston Calls' fanbase grew steadily, until in spring 2004, Clayton left the band. Through mutual friends, Josh Grigsby was introduced to the band and became their drummer on May 15, 2004. The newly manned five-piece went into the studio with producer Jesse Cannon, to record their Sampler Volume 2 (2004). A few months after its release in August 2004, Houston Calls became the second band to sign with Rushmore Records, a subsidiary record label of Drive-Thru Records, who the band had been friends with ever since their formation.
On August 2, 2005, the band's official debut album, A Collection of Short Stories, was released. Produced by Ed Rose, the CD contained eleven songs, three of which had previously been released on their two samplers.

In November 2006, Kenny Ryan announced he was leaving the band, Houston Calls found a replacement in Jose Lopez in Feburary 2007 who had been filling in for Kenny.

In April 2008, the band entered the studio with producer Mark Weinberg to record their follow up to A Collection of Short Stories, The End of an Error and was released on October 14, 2008, along with the single "Life Won't Wait". The album was made available to stream via AOL on the day of release. The band went on a UK Tour as main support newcomers You Me At Six. Farewell were the openers.

At the end of December 2008, founding member Jarrett Seltzer left after no longer wishing to tour as a musician. Two weeks later, it was announced that Jose Lopez would no longer be in the band due to personal reasons. The band has announced that Dan Diaz of Red Light Green Light will be filling Jose's spot. Jason Jaksetic of The Pilot will be filling in on bass. The tour will go on as planned.

On June 9, 2009, the band officially announced that they are disbanding. They will play their last show on August 29, 2009, at School of Rock in their hometown.

The End Of An Error

A Collection Of Short Stories