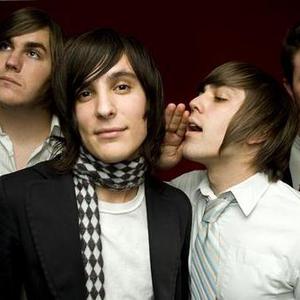 Self Against City is a pop-rock band from Sacramento, California. They formed in 2004 and are signed to Drive-Thru/Rushmore Records. For some people, the main goals are a pimped out ride and a pimped out life. Ask Self Against City lead singer Jonathan Temkin about his goals and he tells a very different story. ?People are searching for something to make themselves complete,? he says. ?If we can inspire people with our music, I can die a happy person.? Temkin may be on to something, especially in light of Self Against City's revelatory new Drive-Thru/Rushmore CD Telling Secrets to Strangers.

For some people, the main goals are a pimped out ride and a pimped out life. Ask Self Against City lead singer Jonathan Temkin about his goals and he tells a very different story. ?People are searching for something to make themselves complete,? he says. ?If we can inspire people with our music, I can die a happy person.? Temkin may be on to something, especially in light of Self Against City's revelatory new Drive-Thru/Rushmore CD Telling Secrets to Strangers.

Produced by Steven Haigler (Pixies, Fuel), the songs on the album were written by Temkin and guitarist Jack Matranga. The two sketched out every progression and guitar riff in advance. The prep time paid off, as a seamless cohesion ties the album together. "Every song is a chapter," says Temkin, "a summation of everything we went through in the last year."

He's referring to rock ?n' roll grad school, i.e., touring a big country in a small van. Every triumph and misbegotten adventure has been converted into song, starting with ?Becoming a Monster,? a punch-drunk rocker Temkin calls ?our mission statement.? The track exemplifies the band's signature sound: buzzsaw guitars, choppy rhythms and Temkin's trip-wire vocals. ?We want to be energetic and melodic at the same time,? says Matranga. ?But we didn't want just one song repeated ten times on the record.?

Their pattern holds true on songs like ?Stroke of Luck?, ?Ready and Willing? and ?Even the Strong Won't Survive.? Says Temkin of the latter, ?It's a testament to growing up and having to put mental restraints on myself. It's about different forms of addiction and the inner struggles people have.? The tuneful guitar-centered ?Disappearing Act? is about an eccentric former band member, while the acoustic-flavored ?Tequila Moonlight? is one of the CD's more introspective tracks. ?It's about an alcohol-driven memory of a few key events that happen over a night? says Temkin. ?It was written mostly by Jack, and is so pure and honest.?

?Yours Isn't The First? is, says Temkin, an ode ?to everyone who ever had their heartbroken because they got dumped,? while the sly ?Smooth Silver? is one of the CD's most adventurous songs. ?It's about frustration, desire and confusion wrapped into one,? he notes. The CD ends with ?Back to Our Innocence,? a full-circle rocker that serves as the perfect grace note. ?It's our way of saying when you're a child that's when everything feels so pure. When you get older things get desensitized. You lose the vivid colors. We're on a quest to feel like childlike adults.?


That quest wasn't born yesterday. Though the band made a big impression with their 2005 Rushmore debut EP ?Take It How You Want It,? the origins of Self Against City stretch back further. The son of a single mother, the Texas-born Temkin grew up in Hawaii, Germany and northern California, raised mostly by a loving aunt and uncle. He


was given access to all kinds of musical instruments and became proficient on several. But it was a Matchbox 20 concert in Frankfurt that proved the tipping point. ?Something changed in me,? he remembers, ?and I said, ?That's what I'm gonna do.' From then on I begged for a guitar and at 15 I finally got one."

Temkin moved back to California's Central Valley and started playing guitar in various bands, one of which anointed him lead singer, even though he'd never sung in his life. Turned out, he was good at it. He also started writing songs, but the big break came in 2003 when he met Matranga and LaTour. ?I spent every waking second figuring out what we needed to do to get the band together,? he says. ?I was with musicians who wanted exactly the same thing as me.?

Jack Matranga had a very different upbringing from Temkin: living in the same home his whole life, parents happily married. But the two clicked right away as songwriting partners and performers. ?He's nuts,? says Matranga of his friend. ?I feed off of him. When we first started writing, we'd hop in the band room, turn on the amp and mold a song. Our confidence has grown since then.?

Bassist Patrick O'Connor and drummer Chris Trombley rounded out the line-up of Self Against City (the name came from Temkin mishearing a DJ announce the Bowie classic ?Suffragette City?). The band cut a few demos, posting two on PureVolume. Those tracks caught the ear of Drive-Thru co-founders Richard Reines and Stefanie Reines, who kept tabs on the band's progress. Only five months after officially forming, the band had their Rushmore deal, and soon enough a debut EP. Buoyed by rave reviews, Self Against City toured the U.S. as well as performed at the CMJ convention. All the while, they were thinking ahead to the new CD. ?We're a high energy rock band,? says Matranga, ?but we wanted to write something a little bit deeper.?

O'Connor and Trombley played on the new CD but have since left the band. All five remain friends, and the others were sorry to see them go. But with the release of Telling Secrets to Strangers, Temkin, Matranga and LaTour are looking only forward. ?The day we finished the album,? says Temkin, ?I thought we did everything we set out to do: make a record we were proud of, write songs we believed in and let people know who we are.?

Take It How You Want It