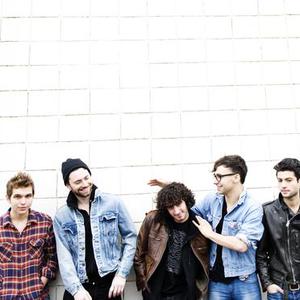 Steel Train is an indie rock band which formed in 1999 in New Jersey, United States. They consist of Jack Antonoff (vocals, guitar), Daniel Silbert (guitar), Evan Winiker (bass, vocals), Justin Huey (keyboards, vocals) and Jon Shiffman (drums) The band began when two friends, Jack Antonoff and Scott Irby-Ranniar, sharing a common love of music, began playing together. They busked in subways and alleyways in New York, and in 1999/2000 recorded a demo that garnered a large degree of record label interest.

The band began when two friends, Jack Antonoff and Scott Irby-Ranniar, sharing a common love of music, began playing together. They busked in subways and alleyways in New York, and in 1999/2000 recorded a demo that garnered a large degree of record label interest. Despite the array of offers, the guys, now called Steel Train (after lyric in a Sublime song) eventually chose to sign with Drive Thru Records particularly drawn by the support but also artistic freedom the label offered.

In 2002, the band recorded their debut ep entitled 'For You My Dear,' recruiting Evan Winiker (formerly of NJ emo band Random Task) and Matthias Gruber to help with recording and touring. The two later became full members of the band, first Winiker (who was presented as a full member in the promotional pieces for that same ep, released in January 2003) and later Gruber, who joined with second guitarist Matthew Goldman to complete the band and create Steel Train.

Together the band went on to record the '1969' ep (a CD of cover versions of songs from that year that inspired the band and their sound), and their debut album 'Twilight Tales From The Prairies Of The Sun,' dropped a year later in 2005. In December of 2006 the band announced that they would be departing ways with Matthias Gruber (drums) and Matt Goldman (guitar) who chose to pursue other interests. The positions were filled by tour manager Daniel Silbert on guitar and Jon Shiffman on drums.

In 2009, the band left the Drive Thru label and in June of 2010 independently released their eponymously-titled third LP. Included in that release was a companion album, 'Terrible Thrills: Vol. I', consisting of covers and re-imaginings of each 'Steel Train' track by female artists, including Scarlett Johansson, Tegan and Sara, Holly Miranda, Alia Shawkat, Amanda Palmer, and Jack's sister Rachel Antonoff.

The band often polarizes opinions, mainly based around the fact that the style of rock they play is more 'classic' (Jack often jokes the band was "30 years too late"), yet people see them as very much a part of the emo/pop-punk scene (mainly due to their Drive Thru Records connections). They are well noted for their impressive live shows and 'jamming' ability.

The lead singer, Jack, also used to date Scarlett Johansson and the song Better Love off of Twilight Tales from the Prairies of the Sun is about/makes reference to her [1] [2]. Though Better Love is a song strictly about her, he also references her in "2 O'clock'" and "Dig". "Josie smiles and laughs, while me and Scarlett will smoke our hash." [3]and "oh, my scarlet you had a real friend in me."Lyrics

Twilight Tales From The Prairies Of The Sun