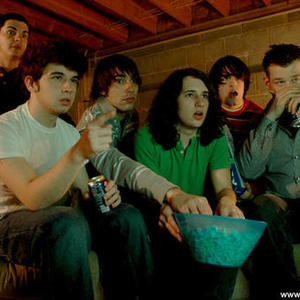 After less than two years together, Hometown Anthem has already made its mark on the underground music scene. A relentless touring schedule has earned the band a reputation as one of the most powerful acts performing today. With the release of their debut full-length Dont Hold On To What You Hear (Emerald Moon Records, 2005) and its follow-up ep If We Could Dream (EMR, 2006), this six-piece from New Jersey has begun its steady climb to the top. Hometown Anthems blend of aggressive punk and irresistible pop hooks, together with its dynamic stage show earned them a slot on the 2006 Warped Tour.

It was on the strength of those performances that the band was chosen over 12,000 other bands for inclusion on the Ernie Ball compilation cd 13 Of The Best Unsigned Bands In North America (Warcon Records, 2006).

Through their travels and triumphs, Hometown Anthem has drawn strength
from the unique bond they share, on stage and off. Friendships stemming from childhood have lead to a special chemistry not found in many more experienced bands. Wherever they play, audiences are drawn in by that chemistry, crowding stages and barricades to sing along in unison with lead singer Joe Crawford and keyboardist David Rodrigues. Guitarists Dom Gaglio and Steve Dufresne, drummer Joe Static Hughes and bassist Joel Cuozzo-Gonzalez feed off the energy and send it back to the crowd multiplied. Never precious or choreographed, a Hometown Anthem show delivers something heartfelt and real every time. Afterwards, band and fans mingle indistinguishably, laughing, talking and looking forward to the next show.

With a dedication befitting their working class roots, Hometown Anthem
has taken breaks from touring only to write and record new material. With the release of If We Could Dream (produced by New Jersey fixture Rob Freeman of Hidden In Plain View), all that hard work has paid off. Listen to it and you will hear a band coming into its own, a band that has found its voice. With all the pieces now in place, Hometown Anthem has shown fans and peers alike that they are here to stay and ready to take on the world.

REVIEWS
""If We Could Dream" is a lovable, infectious EP in the vein of Chroma from Cartel and Sticks And Stones by who else other than New Found Glory. Hometown Anthem writes songs that are pure pop punk perfection and are sure to be stuck in your head for the next six months to come. The EPs opener Like No Other definitely states, We have so much left to live for, so much left to offer.
9 out of 10 SkylinePress.net

"Through their music, you can feel their energy, friendship, determination, and passion. It seeps through every song, every breath, and every word. They are a breath of fresh air for the New Jersey scene and soon to spread worldwide." 8/10FortheSound.com

"The song "Like No Other", is probably one of the catchiest songs ever written."
Ryan Imhof of Absolutepunk.net

Don't Hold On To What You Hear

If We Could Dream