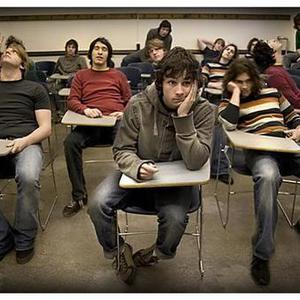 The Junior Varsity was an American alternative rock band from Springfield, Illinois. Guitarist Andy Wildrick put the original line-up of The Junior Varsity together in 2002. After a few line-up changes, they recorded an EP and began playing around central Illinois. Following the release of full length album on British Records, the band played over 200 shows. ?Many people say all you have to do to make it is tour, tour, tour, but we found out this isn't the case...

Guitarist Andy Wildrick put the original line-up of The Junior Varsity together in 2002. After a few line-up changes, they recorded an EP and began playing around central Illinois. Following the release of full length album on British Records, the band played over 200 shows. ?Many people say all you have to do to make it is tour, tour, tour, but we found out this isn't the case, building a fan base comes slowly,? explained Wildrick, ?nevertheless, we got good reviews for the album, and decided to drop out of college and pursue the band full time.? Moving into a dilapidated house in Bloomington, they wrote the album and rehearsed constantly. The band took jobs at fast food joints and in Wildrick's case, doing experimental drug trials to make ends meet; they spent every spare minute rehearsing or touring in preparation for their next move. Victory Records took notice of their frequent, well-received shows in Chicago, and signed the band to a deal, the same day as their close friends from the local scene, June.

Matt Squire, known for his work with Midtown, Northstar and The Explosion, came on board to produce the album, and the band headed to Maryland to record in his Phase Studios. ?We spent five weeks on the album, which was huge for us, it gave us the chance to really make the professional sounding album we had in mind, and Matt's contributions helped us gain perspective on how to achieve this. We spent a full week on pre-production and changed aspects of every song, and wrote two new ones as well? explained Wildrick, ?Tracking was great; it is much easier to be creative when you hear yourself sounding so clear and pristine in studio monitors, there seemed to be more room for experimentation.? Squire encouraged the band to make the most of their time, leaving the studio every night after giving them ?homework?, and by morning, sticky arrangements and guitar leads would be completed. ?Sometimes when the task is in front of you and there's nothing else you can do but write, you actually use your most natural creative force,? commented Wildrick.

Lyrically, The Junior Varsity avoid boy/girl conflicts in favor of obscure references that run the gamut from the mythological bent of ?Mad For Medusa? to family dramas mentioned in ?What It Meant To Be Clean?. Their fascination with the more bizarre side of pop culture evolved into a Big Foot homage and commentary conceived while watching a Girls Gone Wild commercial. But it wasn't all fun and hard work ? some seriously bad luck occurred as well, threatening the morale of the entire band. Their van was broken into four times during the recording phase, losing a vintage moog organ lent by a friend, computers, ipods and thousands of dollars worth of CDs and t-shirts on the eve of their U.K. tour with Straylight Run. ?The last attempted robbery was when some assholes backed a U-Haul truck up to the studio door and broke in at 1am with plans to ransack the place,? remembers keyboard player Nick, ?luckily we defused the situation and they took off. It was hard to keep out minds completely on our goal of making a great record with stuff like this happening, but somehow nobody was really affected by it. We understood that all we have is this band and making the album was one of the most important things we've done in our lives.?

Songs like ?If It Hurts You? showcase minor key arpeggios for a spacey presentation, while ?Everyone's Got Something They're Running Out Of? pays homage to Rush in guitar breaks and lyrical phrasing. ?Mad For Medusa? brings a lighter pop side of the band out, with multi-tracked, dual guitars and chiming keyboards giving it extra sheen. The Junior Varsity names bands like American Football, Radiohead and Yes as influences on their sound, and while their influences are heard, they are blended into unique arrangements and augmented by their signature breaks and fills. ?Wide-Eyed? is chock full of pop songs with ethereal vocals, layered guitars, tight rhythm and surging keyboards bridging it all.

Their debut release, The Great Compromise, was re-released through Victory Records on May 30, 2006.

The Junior Varsity finished recording their third LP at the conclusion of their December 2006 tour with labelmates Bayside. This album, entitled Cinematographic, was released by Victory Records on June 19, 2007. The Song "The Sky!" was released on "Oven Fresh" on Fuse from their latest effort called Cinematographic.

In August 2007, they were set to tour with Permanent Me and Scenes from a Movie. Soon before the tour started, rumors about Asa Dawson leaving the band were confirmed, and The Junior Varsity left the tour.The JV did play a show at the Rock n Roll Hall of Fame without Dawson. The vocalist/ bass player at this show was Brandon Carnes who used to be the frontman for Midnight Fall, a band from Springfield, IL. On October 21, 2007, Andy Wildrick announced that the group would be going on indefinite hiatus, and that the band members would be going to college but may do occasional one-off shows locally in Illinois.

Andy Wildrick is currently in The Dear Hunter, an Indie Rock band from Boston, Massachusetts.

On December 28th, 2007, The Junior Varsity had their official farewell show at Club Chrome in Springfield, IL with opening bands The Graduate, WiSE & BURN, and Greenwood. The full lineup performed that evening for the first time since Summerfest.