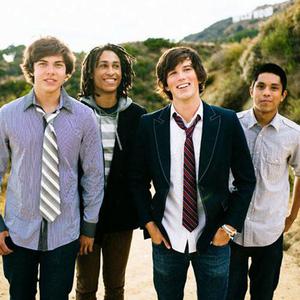 Allstar Weekend is a band started in Poway, CA. Their old name was Outerspace Politicians & Allstar. The band consists of Zach Porter-Vocals. Cameron Quiseng-Bass and Michael Martinez-Drums. Beyond their exceptional musicianship and stage presence, these guys write great pop songs: melodic, smart and edgy. Zach and Nathan do most of the writing (though Cameron and Michael weigh in). Moreover, they wield a mature craftsmanship beyond their years.

Beyond their exceptional musicianship and stage presence, these guys write great pop songs: melodic, smart and edgy. Zach and Nathan do most of the writing (though Cameron and Michael weigh in). Moreover, they wield a mature craftsmanship beyond their years."I'm a kid," says lyricist Zach, "so I feel issues a kid my age would listen to. I try not to write every song about a girl." Adds Nathan, "When we first came to this band, we just felt we had to write all the time. That's all we did. We just developed this cool writing process, and people started liking it."??Currently Allstar Weekend is in the studio working the likes of Howard Benson, Eddie Galan, Charlotte Caffey, John Feldman and Dave Bassett. But long before that, San Diego band's homegrown demos were good enough to wow siblings Richard and Stefanie Reines, founders of Drive-Thru Records, and now managers of the band. "We don't freak out about bands too often, and we never insist every band we work with is destined for Top 40 success," says Stefanie. "Allstar Weekend is one of those rare instances where we just know they're going to be huge."Nathan credits his dad for teaching him the finer points of music appreciation. Zach was raised on a steady diet of Bruce Springsteen and Elton John, artists he credits for inspiring his artful approach to songwriting. Cameron fell in love with his parents' 80's pop classics, from Prince and Michael Jackson to Duran Duran, later graduating to Jimi Hendrix and B.B. King.

Zach and Cameron had been friends since middle school, but the makings of Allstar Weekend didn't begin until Nathan met Zach later in high school. Though a year apart, they saw in each other kindred musical spirits, and began a string of garage bands. "Then Zach and I decided to take our abilities somewhere else," remembers Nathan. "We wrote songs and recorded in our bedroom, then put the music up on Myspace."

Not long after, first Cameron, then Michael came aboard and the line-up was complete. With key influences like the music of Queen and Blink-182 at their back, the band wasted no time getting serious about developing their careers. "It wasn't just the artists who inspired us," recalls Zach, "but the producers. We tried to figure out how they made things sound the way they did. It was a trial and error process, and when we first met, it was our entire life. We'd sit there all day figuring out how to get certain tones out of the guitars, how producers tracked vocals, how drums were mixed."

The Walt Disney Company sure noticed. The band was selected to participate in Radio Disney's "Next Big Thing" program, and the reaction was so positive, Hollywood Records grabbed them. So far, they've racked up more than 2.5 million Myspace plays and 50,000 You Tube plays for their video of "Journey To The End Of My Life." In concert, Allstar Weekend has shared the stage with bands like Justin Beiber, Maine, Forever The Sickest Kids, Selena Gomez and Savanna. Typically their live shows turn into a picture-and-autograph frenzy. "A few months ago we didn't have a single fan," laughs Cameron. "Now we love hanging out with them and getting to know them."

With their new 24/7 whirlwind existence, the members of Allstar Weekend have mastered the art of chilling, and do not take themselves too seriously. Which is a good thing, considering the frenzy is only just beginning. "We never clash and we're always on the same page," says Nathan. "That's because we have music in common."

EDIT: Nathan Darmody has since left the band and the boys have left their label Hollywood Records

I Wanna Dance With Somebody (Single)