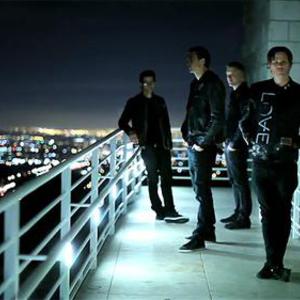 Tom DeLonge began working new material during the blink-182's final tour in 2004 and shortly after they began their hiatus in February 2005. For half a year he worked alone in his home studio before gathering musicians to form the band. Upon fiddling randomly for several weeks with the band's logo, Tom suddenly realized that if he were to invert the middle "A" of the band 's acronym into what appeared to be a "V", he would have the name of his daughter, Ava. As rumors were floating around about the band's "break-up", DeLonge chose to abstain for half a year from any interviews surrounding the issue and his future plans; instead he concentrated on writing and recording in his home-based studio. In September 2005, he finally spoke publicly in Kerrang! magazine, where he unveiled the name of his new band, "Angels & Airwaves". The band included former Hazen Street guitarist and high-school friend David Kennedy, former Rocket from the Crypt drummer Adam Willard and former The Distillers bassist Ryan Sinn.

The band released their first single, "The Adventure" on May 18, 2006 and their debut album, "We Don't Need to Whisper", on May 23, 2006. Recorded and produced at DeLonge's Never Pants Ranch, the album is a mix of huge production values and anthemic songwriting sounding nothing like the pop-punk sound that earned DeLonge huge amounts of credit for his work with blink-182

The band released new album "I-Empire" On 5th November, 2007 which gained fast popularity, climbing to the number one spot on iTunes almost overnight. The first single from the new album, "Everything's Magic", was leaked onto the internet, and on August 25, 2007 it was the most requested song on California radio station KROQ. Angels & Airwaves began streaming the song on their myspace profile on August 28, 2007. I-Empire debuted on the Billboard 200 chart at No.9 with sales of 66,000 in its first week. On November 16, 2007, Tom announced on Modlife.com that "Breathe" will be the next single/music video off of the I-Empire album. A documentary by the band entitled Start The Machine has also been released.

According to the United States Patent and Trademark Office, Tom Delonge tradmarked the name "Angels and Airwaves" on June 24, 2005. The name apparently occured to him whilst driving in his car. Realizing this would be frequently abbreviated to "AAA", he decided to move the middle letter upside down for a more unique and personally meaningful "AVA" as his daughter is named Ava. This was amongst the lingering confusion of Blink-182's "indefinite hiatus" which later led to a confirmed split and the beginning of the band.

In an interview with British magazine Kerrang!, DeLonge commented about the band's beginning:
"Just before all the blink-182 stuff happened when we were in Europe, I had a really weird epiphany. My heart was beating about a hundred miles a minute for three weeks straight and it had never happened to me before in my life. I really felt like I'd been touched by something and I felt I was meant to do something massive."

Originally, "Valkyrie Missile" was stated for release via iTunes on December 13, 2005, DeLonge's 30th birthday. However, due to discussions with their record label, Geffen, the band decided to push the release date back to a later date. Instead, the Angels & Airwaves website produced the first ever glimpse at the movie currently in production, a 1-and-a-half minute long trailer featuring portions of the delayed song.

Angels and Airwaves released both a music video and a short film for their first single, "The Adventure"; the band also released a short film for "It Hurts" via the band's official website. Both are short sci-fi films and together form the first part of a proposed ten-part series, following the cast's struggle through an unfamiliar world. On October 3, 2006, the band released the third installment in the series, "The Gift".

In 2006, the band embarked on their first full-length tour, which was headlined by Taking Back Sunday and supported by Head Automatica and The Subways. Numerous one-stop dates at the Give It A Name 2006 festival were played with the likes of My Chemical Romance, Lostprophets, We Are Scientists, Hundred Reasons, Panic! At the Disco, The Bled, Thrice, Billy Talent, Goldfinger, Underoath, Paramore, The Ataris, Aiden and Atreyu. The band also played on The Late Show with David Letterman on May 15, 2006. The band headlined a tour in the US, supported by The Sounds, which ended with a stop in Mexico City, Mexico. After that tour, the band went to perform in Japan and Australia.

They also performed at two shows at London's Hyde Park and in Manchester supporting the Foo Fighters on their successful In Your Honor tour. Over 100,000 people over both days. Other bands they played with over the two days included The Strokes, Eagles of Death Metal, Motorhead, Queens of the Stone Age, Juliette and the Licks, and Brian May and Roger Meddows-Taylor from Queen.

Among the plans for a big future, AVA have announced they are planning on releasing a film involving their music. The World War II-based movie is being created primarily through the use of CGI. This "story" is apparently based upon Tom's life and will give viewers insight into the hiatus of blink-182. Currently, the only known cast member is Michael Ostman.


Tom DeLonge stated in his PR Editorial Review:
"So preachy, I know. And I don't mean for it to be. I wanted it to be the recording of an emotional event in my life. I love the idea of an album doing that, because I knew that if I could get 150,000 people in an arena to have the same feeling at the exact same moment, it would end up feeling like a religious event. I really want the room to be dark, with black light or a candle. People should have headphones on, and they should be really comfortable, maybe sitting on the floor, leaning against the bed. I spent a year and a half working on this record, trying my hardest to give people a moment of escapism. All I ask is 50 minutes of a lowered heart rate."

On 16 July 2007, the Angels & Airwaves website was updated to feature a teaser trailer in the startup. The trailer features the song Star Of Bethlehem playing over concert footage, quotes from critics about "We Don't Need To Whisper", and members of the band riding on motorcycles and riding in a truck.

LOVE is Angels & Airwaves third studio album. The album is available for DOWNLOAD free of charge due to corporate underwriting