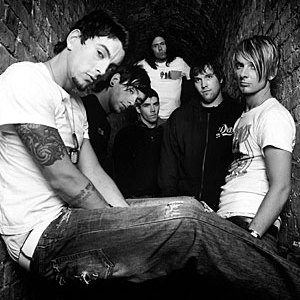 Lostprophets is an alternative rock band formed in Pontypridd, Wales in 1997. It was founded by current vocalist Ian Watkins and guitarist Mike Lewis. Initially, Watkins played drums for the band, although its success only began when he transferred over to lead vocals. They have released several demos, none of which have been produced commercially, five studio albums, and fourteen singles. Their fifth studio album is titled Weapons, released on the 2nd of April 2012.

The first of these albums, The Fake Sound Of Progress, was originally recorded for the meager sum of ?6000 and intended as a glorified demo, but after catching the ears of several major labels, the band re-recorded and re-released the album on a much wider scale through Columbia Records. This resulted in a backlash against the band that was exacerbated by the four-year gap between their first and second albums. When the second album, Start Something, was finally released, the band achieved even greater success, entering the UK album chart at number five, and earning the band international popularity, most notably in the United States. Their third album entitled Liberation Transmission was released on the 26th of June 2006 in the UK and entered the UK album chart at number one.

In April 2007 Lostprophets began the Final Transmission - the last round of touring of their current album with Aiden and Taking Back Sunday as the confirmed support. The bands played at huge venues such as Wembley Arena. The end the tour, on Saturday 26 May 2007, lostprophets performed at The Full Ponty festival at Pontypridd's Ynysangharad Park. Pontypridd is also the hometown of most of the current band members and so the festival was advertised as "lostprophets homecoming". Other bands at the festival included Reel Big Fish, The Automatic, The Blackout, Gallows and Kids In Glass Houses .Following the tour, the band hit the studio to record their fourth album which Ian Watkins is describing as a return to their roots with heavier punk influences. Watkins says "It will be a lot darker and a lot more intense. It'll have a completely different vibe to it ... but it won't be like Converge or nuthin".

Their 4th studio album "The Betrayed" was released on 19 January 2010.

More information on Lostprophets can be found at their official website http://www.lostprophets.com.