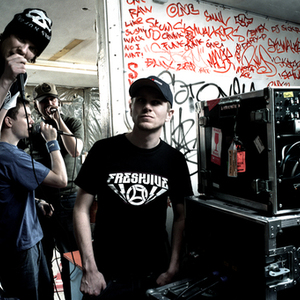 Quarashi was a rap/hip-hop band from Reykjav?k, Iceland. It was comprised of H?skuldur "H?ssi" ?lafsson (replaced by Tiny (real name Egill ?lafur Thorarensen) on the final album), who was the lead vocalist and frontman of the group, Omar Swarez (?mar ?-rn Hauksson), who served as a rapper and hype man, and Steini a.k.a. Stoney (Steinar Orri Fjeldsted), who also served as a rapper and hype man. The fourth member of the group was S?lvi Bl?ndal, who played drums and was the main songwriter/producer.

The group has a loyal following, especially in their native Iceland. Each of their records (Switchstance, Quarashi, Xeneizes, Kristnihald undir J?kli, Jinx, Guerilla Disco) have sold well in their homeland. Quarashi was a rap group, but they combined elements of rock, techno, and funk into their songs, lending an air of unpredictability in their music. Comparisons to Rage Against The Machine, Eminem, and The Beastie Boys are often heard when discussing Quarashi, but the group had their own unique style that distinguished them from other famous rap/rock groups. Their influences ranged from Public Enemy (Bl?ndal says that P.E.'s Fear Of A Black Planet is what inspired him to make music) to Led Zeppelin, and that can be heard in their songs.