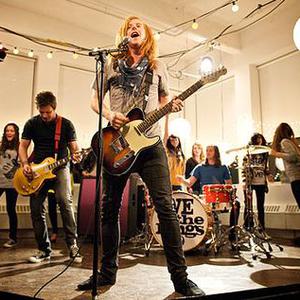 We the Kings is an American rock band from Bradenton, Florida, currently signed to record label S-Curve Records. They released a self-titled full-length album in 2007, which peaked at #151 on the Billboard 200. Their second full-length album, Smile Kid, was released in December 2009 and have since completed a variety of tours. We the Kings also sports their own miniature series of webisodes, called 'The King's Carriage," detailing life on their tour bus. Their frontman Travis Clark has speculated on his blog that their next album could be an acoustic album.

Furthermore, on MTV, We The Kings appeared on the show Silent Library.

The band members (Travis Clark - Lead Vocals/Rhythm Guitar/Piano, Hunter Thomsen - Lead Guitar/Backup Vocals, Charles Trippy - Bass, Danny Duncan - Drums) first met at Martha B. King Middle School in Bradenton, and their name refers to the school mascot. The group began playing together while at Manatee High School in the early 2000s, and landed on the PureVolume Top 10 list after hiring a manager.

Their self-titled debut was released October 2, 2007.

Their most recent single on their album Smile Kid is called "We'll Be A Dream."

The Story Of Tonight (EP) (Remixes)

Any Other Way (CDS)