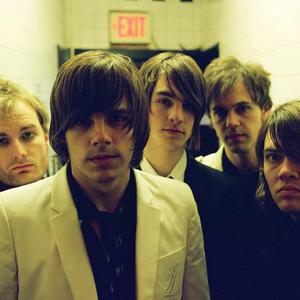 The Click Five is a pop rock band from Boston, Massachusetts, U.S. Formed in 2003, the group consists of five members: Joe Guese, Ben Romans, Ethan Mentzer, Kyle Patrick, and Joey Zehr. Joe, Ben, Ethan, and Joey formed their band while attending Berklee College of Music in Boston (though the band is out of Boston, the men are really from different areas of the U.S.) Then, they enlisted Eric Dill as the band's lead singer.

They enjoyed success on the U.S. Billboard Hot 100 Singles Chart with the song "Just the Girl" (written by Fountains of Wayne's Adam Schlesinger) in 2005. Earlier in 2005, they toured for two months as an opening act for Ashlee Simpson. Later in the year of 2005, they toured with the Backstreet Boys. Afterwards, The Click Five began an autumn 2005 tour with Ryan Cabrera and The Veronicas. They have also performed at J.C. Penney's Rock Your Prom fashion shows. In the autumn of 2006, the band were the the special guests on an arena tour of the UK and Ireland with the pop rock band McFly.

As of March 2007, Eric Dill left the band to pursue a solo singing career as well as an acting career in Los Angeles, CA. The Click Five replaced him with Kyle Patrick.

Their sophomore album, Modern Minds and Pastimes, was released June 26th, featuring the first song off the album titled "Jenny".