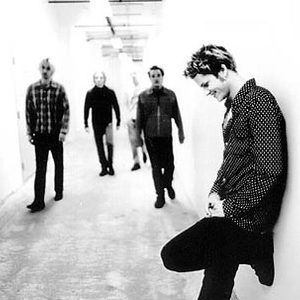 Econoline Crush is an industrial alternative rock band based in Vancouver, British Columbia, Canada. Though originally from Seattle, Washington, they eventually moved to lead singer Trevor Hurst's native Canada, where they have been the most successful. Notable singles include "Wicked", "Home", "Sparkle And Shine" and "You Don't Know What It's Like". The band was formed around 1992, after Hurst answered an ad placed by Tom Ferriss (formerly of Moev) in a Seattle-area newspaper.

The band was formed around 1992, after Hurst answered an ad placed by Tom Ferriss (formerly of Moev) in a Seattle-area newspaper. The band released a 5-song EP called "Purge" before their first LP, "Affliction" came out to critical acclaim and moderate commercial success in Canada.

Though it received mixed reviews, their second LP, The Devil You Know, has been the band's greatest commercial success to date. Produced by veteran producer Sylvia Massy (Tool, Red Hot Chili Peppers), the album features a more mainstream sound than "Affliction." After their success with "The Devil You Know," the band returned to the studio with another veteran producer, Bob Rock (Metallica, Motley Crue), to create their third LP, which became "Brand New History."

While "Brand New History" was a moderate commercial success, it received mixed critical reviews. Following the release of the album's first single in 2001, "Make It Right," the band went on hiatus. During the hiatus, Trevor Hurst started a new band called "Hurst". However, in January 2007, the band got back together to tour with Hinder across Canada and most recently, with Three Days Grace and Seether. Their independently-released fourth LP, "Ignite," came out on January 15, 2008.

Surefire: The Best Of

The Devil You Know