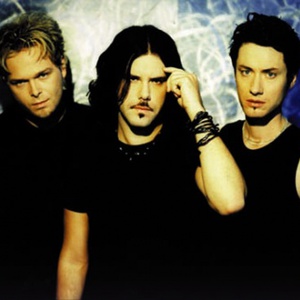 The Tea Party is a Canadian rock band from Windsor, Ontario, with blues, progressive rock and Middle Eastern influences who formed in 1990 and disbanded in October 2005. They reformed in 2011 to play some shows in Canada. They have released seven albums commercially during their time together. Guitarist and vocalist Jeff Martin, who has perfect pitch, was also producer for almost all of their albums.

All three members played a range of instruments and they took up to 37 on tour with them at times in their career. They were very successful in Canada and Australia, and to a lesser extent in Europe, but never managed to crack the American market.

The band received some media criticism for Jeff Martin's Jim Morisson-like stage persona in some of its videos and their Led Zeppelin-esq riffs, although he seemed determined to be striving to create his own image and sound. His looks certainly do draw some comparison, however, to The Doors' late front man.

Their sound is hard to categorize as each album possessed different themes and influences. Splendor Solis (1993) was a more acoustic, blues-based record, while Edges Of Twilight (1995) was much darker with strong Middle Eastern influences on several tracks. Transmission (1997) saw a dramatic change to a darker, more industrial-tinged sound, and it was distributed in the USA by Atlantic Records. The last three albums by the band featured various efforts to attract a wider commercial audience, with the single "Heaven Coming Down" reaching No.1 on the Canadian mainstream charts in 1999.

In 2000, Capitol Records finally released a retrospective compilation in the USA of their Canadian singles entitled Tangents after only releasing their first two albums south of the border.

The Tea Party released The Interzone Mantras in 2001, but it did not possess the singles of its predecessors.

In October 2005, a year after their final album Seven Circles was released, Jeff Martin left the band and embarked on a solo career, releasing an album in early 2006. jeff burrows (drummer) and Stuart Chatwood (bass/synthesiser) have also had post-Tea Party successes, the former in several projects and the latter in soundtrack composition. Burrows and Chatwood worked together on a new project called The Art Decay before Burrows joined Crash Karma in 2008.

On April 12th 2011, an official Facebook page was launched with a biography section that closed with "The band is scheduled to play a select number of dates in 2011. No other info was available at this time." The following day, the local radio station K106.3 announced the Sarnia Bayfest lineup including The Tea Party, which was later confirmed by drummer Jeff Burrows on his radio show on April 13th. Burrows further stated that a Canadian tour was also in the works.

The Tea Party performed at the Cisco Systems Bluesfest in Ottawa, Ontario on July 14th, 2011, and the band will be playing a Canadian tour commencing on November 15th, 2011 in Vancouver. The band's website and tour is called "THE TEA PARTY - No Politics... Just Rock and Roll". In September 2011, the band was reportedly approached to sell its website URL for over a million dollars by the extremely popular American political movement bearing the same name: www.teaparty.com.

The Ocean At The End