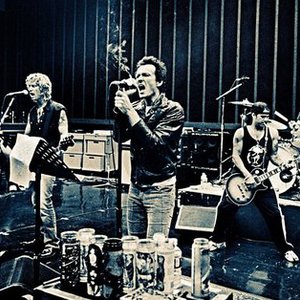 Velvet Revolver is a hard rock supergroup formed in 2002 and consisting of former Guns N' Roses members Slash, Duff McKagan and Matt Sorum, alongside Dave Kushner formerly of punk band Wasted Youth. Stone Temple Pilots singer Scott Weiland was Velvet Revolver's lead singer from their formation until 2008. In 2004, the band achieved commercial success with their debut album, Contraband. Critics initially described Velvet Revolver as a mere combination of Stone Temple Pilots and Guns N' Roses, and criticized the band for a "disconnection" between Scott Weiland and the rest of the band.

With their single Slither, they won the 2005 Grammy Award for Best Hard Rock Performance.

The band released Libertad in 2007, driven by the release of the single She Builds Quick Machines, and embarked on a tour with Alice in Chains. In April 2008, Weiland parted ways with Velvet Revolver and has since reunited with Stone Temple Pilots. Velvet Revolver has been on indefinite hiatus since April and in November 2008, the band was released by their record label RCA Records at their request to allow them "complete freedom to go through whatever process it would take to accomplish" replacing Weiland.

The release of Slash's solo album, Slash, and Duff McKagan's addition to the Jane's Addiction lineup seemed to put future of the band in doubt. However, they still remain optimistic about the future, with new songs written and plans to reconvene in 2011.

The Melody And Tyranny (EP)