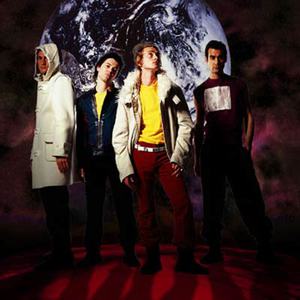 Spacehog are an alternative rock band which formed in New York City, New York, United States in 1994. The group comprised Royston Langdon (vocals, bass), Antony Langdon (guitar, vocals), Richard Steel (guitar), and Jonny Cragg (drums). Though all the band members hailed originally from Leeds, England, the band was formed in New York City in 1994 when Antony Langdon met Cragg by chance, in a caf? where Cragg had a job killing rats. Soon after, Langdon's brother Royston joined the band, and Spacehog were born.

On October 24, 1995, Spacehog released their debut album Resident Alien, which spawned the singles "In the Meantime" and "Cruel to be Kind". The band's second album, The Chinese Album, was released on March 10, 1998. Though it did not sell as well as Resident Alien, the band's popularity was increasing as Spacehog opened for popular acts like Pearl Jam and Supergrass. The Chinese Album featured a more "artsy" sound, with Pink Floyd-like piano on the opening track and Michael Stipe of R.E.M contributing vocals to the song "Almond Kisses".

In 2001, Spacehog released their final album, The Hogessy.

In 2002, Spacehog quietly broke up and the band members went their separate ways, but reformed in 2008.

As It Is On Earth

In The Meantime (EP)