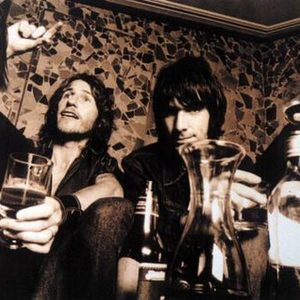 You Am I is a four-piece Australian alternative rock band, fronted by vocalist/guitarist and songwriter Tim Rogers. They were the first Australian band to have three albums consecutively debut at #1 on the ARIA Charts and are renowned for their energetic live shows. Tim Rogers formed the first version of the band in Sydney, Australia, with his school friend Nick Tischler and his older brother Jaimme in December 1989.

Tim Rogers formed the first version of the band in Sydney, Australia, with his school friend Nick Tischler and his older brother Jaimme in December 1989. This initial line-up was short lived and by the end of 1990 both Nick and Jaimme had left the band. They were replaced by the group's one-time sound mixer Andy Kent on bass and Mark Tunaley on drums.

The band released several EPs and singles in the early 90s, though the real breakthrough came when Lee Ranaldo of Sonic Youth caught the band performing at 1993's Big Day Out festival and was impressed enough to produce their fourth EP, Coprolalia, and later the debut album, Sound As Ever, which went on to win the 1993 ARIA Award for Best Alternative Release.

After the release of their first album, Mark and the band parted company. He was replaced by the charismatic Russell Hopkinson (formerly of Nursery Crimes) creating the core line-up to this day. Since then, the band has been augmented by Davey Lane of The Pictures on guitar.

You Am I had toured the US extensively during the mid 90s, including playing with Soundgarden on the Lollapalooza festival, Red Kross, The Strokes and The Smokin' Popes to name a few. Despite little success overseas, the band became well known throughout Australia for their Pete Townshend-esque guitar windmills and their upbeat "ponce and thuggery" take on Rock 'n' Roll.

Further success came with the albums Hi Fi Way and Hourly Daily, with both picking up ARIA Awards. Hourly Daily was the first album released on the Shock label to go to number one in the ARIA charts upon launch. For many, the suburban inspired, 60s bop and folky 12 string melodies were a welcome departure from ever pervasive 70s rock sounds, or even grunge rock.

Subtle country influences became apparent on their 1998 Number 4 Record, which included the poignant Heavy Heart. A heart wrenching, almost karaoke inspired ballad about being 'dropped' by your girlfriend. Evidently each subsequent album has had a few countryish twang which have polarised some fans, who idolise the band's earlier warts and all rock beginnings.

1999 saw frontman Tim Rogers release his first solo album What Rhymes With Cars And Girls, followed up in 2004 by the record Spit Polish. In 2005 he released the critically acclaimed double-LP 'Ghost Songs' and 'Dirty Ron'.

After an album absence prolonged by touring and record label interference, Dress Me Slowly was released April 2001. Arguably containing some of the bands' best work including Damage and Kick a Hole in the Sky there were also some stellar b-Sides on the commercial singles that accompanied the album. These include a song called Older Guys which is track 2 on the Get Up single. Older Guys was one of the stand out songs on Gram Parsons' group The Flying Burrito Brothers album Burrito Deluxe and although the You Am I b-side is an original, Rogers is recognised as a keen student of music history and some connection can be assumed.

Dress Me Slowly was second guitarist, Davey Lane's first bona fide appearance on a studio record. Lane had come to the band's attention from his own work with The Pictures and transcribing, with almost scary accuracy, the band's guitar tabs on the You Am I web site. The band's last collective studio effort was Deliverance in 2002.

The likes of Nic Cester of Jet have mentioned that You Am I, at the very least, reminded them that you don't have to be American to be a successful rock band. Iconic references to Australian everyday suburban life remain a constant theme of Roger's material. The Vines also credit You Am I as a major influence and Silverchair take their name, in part, from You Am I's song Berlin Chair.

Their seventh album "Convicts" was released in May 2006. An about face on the previous two albums, Convicts rocks hard all of the way through with much more straight forward production and higher energy that makes you jump.

Their eighth album "Dilettantes" was released in September 2008.

Who Are They These Rock Stars-