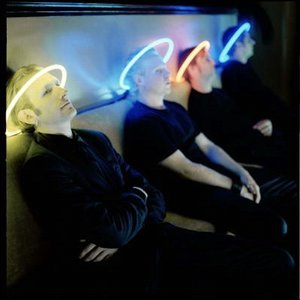 Supposedly, the name "God Lives Underwater" was derived from Jeff Turzo's previous band GLU, from which David Reilly used the initials as a backronym to form the band's name. Influences of the band's sound include Depeche Mode, Nine Inch Nails, David Bowie, Psychedelic Furs, Econoline Crush, and Spiritualized. Reilly disparaged uses of "electronica" in reference to the band in 1998, suggesting that "techno" would be more appropriate, but ultimately saying that he would prefer the label "pop band".

In 1998, the band scored a hit with their second studio album Life in the So-Called Space Age on 1500/A&M, which charted at #137, and soon began nation-wide touring, supporting major label acts and playing numerous music festivals.

However, contractual entanglements and a label bankruptcy postponed the release of their follow-up album Up Off The Floor, and the numerous side-projects created by the GLU band members never saw release. Up Off The Floor was finally released in 2004 on an independent label, but by that time, the core members of God Lives Underwater had split up and moved on to other projects. Jeff Turzo started Wired All Wrong with Matt Mahaffey (and live support from former GLU bandmates Andrew McGee and Scott Garrett), while David Reilly pursued a solo career.

David Reilly died in his sleep on the morning of October 17, 2005 from complications of a coma brought on by bleeding, as a result of tooth infection. He was 34 years old.

Up Off The Floor

Life In The So-Called Space Age