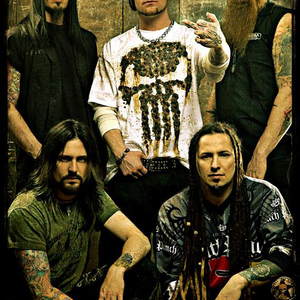 The band recorded their debut album The Way of the Fist in 2006 with Stevo "Shotgun" Bruno (M?tley Cr?e, Prong) and Mike Sarkisyan (Spineshank). The record was mixed and mastered by former Machine Head/Soulfly guitarist Logan Mader.
After making waves in the underground metal scene, in early June it was announced that the band had inked a deal with Firm Music, which is a branch of "The Firm", a highly successful management company (Korn, Staind, Limp Bizkit). Their debut album "The Way Of The Fist" was released on July 31, 2007 The record broke into the Billboard 200 on its first week of release, and hit the #1 position on Billboard's New Artist/Heetseekers chart. Their First single, "The Bleeding" landed in the top 40 rock radio charts, eventually worked its way into the top 10 and ruled the radio waves for an astonishing 8 months. In times when US Rock Radio is anything but friendly toward heavier bands, against all odds 5FDP not just repeated but surpassed their first single's success with their follow up "Never Enough". The song climbed even faster to set up a seemingly permanent camp in the top 10, until the 3rd single "Stranger Than Fiction" showed up on the horizon to take over the guard post.
Supporting their release, for 19 consecutive months Five Finger Death Punch has relentlessly toured North America, eventually establishing themselves as a true headlining act and selling almost 300,000 records in the USA before branching out to the rest of the world. The international release of "The Way Of The Fist" (via Spinefarm/Universal) is scheduled to hit stores across the world in January 2009.
Recently, it was announced that guitarist Darrel Roberts left the band and will be replaced by Jason Hook
Five Finger Death Punch released "Under and Over It" as the first single from their third studio album, American Capitalist on July 27, 2011. (Under and Over It Songfacts).

A Decade Of Destruction Vol. 2

A Decade Of Destruction (Compilation)

Got Your Six (Deluxe Edition)

Purgatory: Tales From The Pit