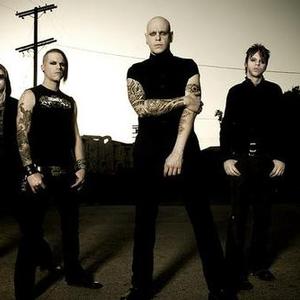 Formed in the mid- '90s, Godhead has been steadily building their fan base and emerging as a true international rock act. Their major label debut release of 2000 Years Of Human Error on Marilyn Manson's Posthuman Records in January 2001 and the 2003 summer release of the follow-up Evolver on Reality Entertainment, have sold well over 200,000 copies to date world-wide. After years of touring extensively with Marilyn Manson, Disturbed, Static-X, Mudvayne, Rammstein...

"We're one of those bands that has done it all, from touring in a broken down van and playing in front of 10 people to entertaining festival crowds of tens of thousands. We've certainly paid our dues and then some, but we don't feel we are owed anything", says front man, Jason C. Miller. "We've always believed in ourselves and our fans have always believed in us and they constantly let us know, which is amazingly encouraging." says Miller.

Formed in Washington, D.C., Godhead was signed to Marlboro Music and had two successful European releases in 1994 and '95 followed by their first US release, ?Nothingness' in 1996 and ?Power Tool Stigmata' in 1998. But it wasn't until 2001 that Godhead broke out in the US.

After years of hard work and determination, MTV and radio stations across the country started catching on to the Godhead sound and began playing Eleanor Rigby and The Reckoning in heavy rotation. The band would play in front of over 3 million people in the next two years and appear on three major motion picture soundtracks including the gold selling ?Queen of The Damned' as well as ?The Blair Witch Project' and ?Dracula 2000'. Their success continued into 2003 with The Hate In Me single from their Evolver album that turned into an MTV2 hit as well as the song Far Too Long, which was featured on CBS Television's "NFL Today" show. In 2006, Cement Shoes Records released, ?The Shadow Line' which also included a DVD of videos and behind the scenes footage. The single Trapped In Your Lies put Godhead in the rock radio Top 40 for the first time in their career.

Now signed to Driven Music Group/ Warner Brothers, Jason C. Miller comments, ?Driven Music Group is going to be a fantastic new home for Godhead. We couldn't be happier to be a part of this company. Creatively they are letting us bring our music to the audience exactly as we've intended, and as artists we can't begin to describe how much we appreciate that!?

Driven Music Group's Mark Nawara and Greg Shanaberger comment, ?We are very excited to be working with such a class act as Godhead.
The band is very hard working and are incredible songwriters. We look forward to big things from them.?

Driven Music Group released Godhead's new album, At The Edge Of The World on October 7th, 2008.

Jason C. Miller is also working on his own solo career which incorporates southern rock and country

At The Edge Of The World