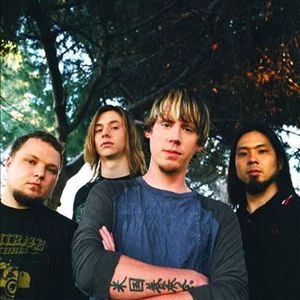 Formed in 1997, Trust Company came together through vocalist Kevin Palmer and drummer Jason Singleton. Originally called 41 Down, the band then recruited bassist Josh Moates and guitarist James Fukai. After building a local fan-base, the band went on to sign a major label deal with Geffen Records. The band then changed their name to Trust Company to avoid confusion with the Canadian band Sum 41.

The group released their debut album, The Lonely Position of Neutral, on July 23, 2002. The album was well received with the lead single "Downfall" gaining heavy exposure through MTV2. Subsequently, the song entered the Billboard Hot 100 singles charts. A second single "Running From Me" followed with more moderate success. The Lonely Position was certified gold by the RIAA, and the band went on to tour with artists such as 30 Seconds to Mars and Papa Roach. They also toured with KoRn and Disturbed as part of the Pop Sux Tour in 2002.

Trust Company was scheduled to play at Ozzfest 2003 but was forced to back out by their label in order to work on their second album, True Parallels, which was belatedly released on March 22, 2005, after an 8-10 month delay. Several months prior to the album's release, original bassist Josh Moates left the group and was replaced by Walker Warren. Despite little promotion from their label, the album entered the Billboard album charts at #32, and has gone on to sell in excess of 200,000 copies. The first and only single from the album, "Stronger," made a moderate impact on mainstream rock radio. According to drummer Jason Singleton on the band's website message board, the second single may have been "The War is Over."

In August 2005, it was announced that frontman Kevin Palmer had left the band due to personal issues. The band disbanded shortly after. Soon after the breakup, Palmer and original bassist Josh Moates came together to form a new project called Amity Lane. The band released their debut album The Sound of Regret on October 31, 2006 via Corporate Punishment Records.

Jason Singleton played as the drummer for several bands in Montgomery, including Arm in Arms, The Spicolis, and The Escape Frame. James Fukai reunited with his old band, Hematovore, under their indie record label, Acerbic Noise Development.

On August 11, 2007, it was announced on www.tunelabmusic.com that the four original members - Kevin Palmer, Josh Moates, Jason Singleton, and James Fukai - were reuniting and have two reunion shows planned in Montgomery, Alabama and that they will be writing and recording a new album for release sometime in 2008. On November 9, 2007 the band headlined what would be considered a reunion show at Seville Quarter in Pensacola, FL. The band has continued to perform shows around the southeast.

The band posted in a Myspace bulletin on February 25, 2008 that Kevin had finished recording the vocals for some new songs and that the band hopes to have an album out around the middle of the year, however, it will be closer to 2009 before the album is ready.

On March 18, 2008, The band posted 2 brand new songs on their MySpace page. The songs are titled "Waking Up" and "Stumbling." The band stated in a blog that these are demos and may be re-recorded.

The band recently announced on its Myspace page that it will be handing out CDs with previously unreleased or somewhat released material from past years at its concerts with the purchase of a t-shirt.

Josh Moates has chosen to leave the band and has been replaced by Amity Lane touring guitarist, Eric Salter.

The band has now expanded its touring to the east coast, with The Exies as the headlining act.

The band released new tracks entitled 'Seasons Change', 'Today' and 'I Can't Breathe' on their Myspace.

Dreaming In Black And White

The Lonely Position Of Neutral

The Album Is Almost Ready (EP)