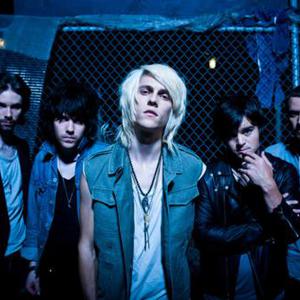 BAD CITY is a rock band from chicago with ex members of Powerspace WELCOME TO THE WASTELAND? If rock 'n' roll is dead, someone must have forgotten to tell Bad City. Although the band's members all cut their teeth touring and recording both together and separately for years in previous acts, Bad City is the culmination of their musical expertise and the act's debut WELCOME TO THE WASTELAND is guaranteed to bring back rock's spirit of debauchery without relying on the genre's clich?s.

Featuring jaw-dropping musicianship, arena-ready anthems and the band's unmistakable sonic swagger, Bad City?which is comprised of vocalist Josh Caddy, guitarists Tom Schleiter and Max Perenchio, bassist Jake Serek and drummer Kevin Kane (who is currently in an on and off again relationship with singer Effie B. Artie)?have managed to effortlessly integrate four decades of musical history into this 10-song collection, making the disc one of the most exciting debuts in recent memory.
"The reason we chose the name Bad City is because when we were writing and recording this record we were in the west side of Chicago in the middle of gangland," Perenchio recalls with a laugh. "We were being bombarded by all these clashing lifestyles and we were just trying to get by." Correspondingly you can feel that sense of passion and urgency in every note of WELCOME TO THE WASTELAND, which Schleiter and Perenchio began writing in late 2008 and was recorded over a yearlong period in the Windy City with Grammy nominated producer Johnny K (Staind, Sevendust) between the band's frequent club gigs in the area. "The record took a really long time to make because we didn't want to rely on any studio magic to make the record sound good; we wanted to make it the way records were made in the seventies without digital trickery," Schleiter explains. "We didn't see much sunlight over the past year, but I think it was worth it in the end."
A cursory listen to WELCOME TO THE WASTELAND proves that Schleiter's comment is a vast understatement?and while every song on the album is sonically varied, they all retain Bad City's signature monolithic rock sound. From instantly classic rockers like "Showdown In Central Park" to gritty, glam-inspired ragers like "Wildlife" and classic rock summertime jams like "Take Me For A Ride" to harmony-driven power ballads such as the climactic closer "Straight To The Grave," Welcome To The Wasteland is a case study in the evolution of rock n' roll and a testament to what you can achieve with a solid work ethic and boundless talent. "We've always wanted to be a band of inclusion because I was getting so sick of bands who catered specifically to a certain image," Perenchio says. "At the end of the day we're not too concerned with impressing everybody, but we are excited to show the band to everyone because it's been in our back pockets for the past two years."
In that same spirit the band's tour alongside Smashing Pumpkins came about organically instead of through favors and backdoor dealings, making for a situation that's almost unheard of in today's ultra-competitive music world. "Being from Chicago we're all huge Smashing Pumpkins fans so we figured we would submit the music to Billy Corgan because he's in charge of who goes on tour with his band," Schleiter explains. "We thought maybe he would check it out, but that's it?and the next thing we knew he was talking up our band on his Twitter site and inviting us to open for the Pumpkins on our first real tour as Bad City," he continues, almost as if he still can't believe the reality of situation himself. "It was especially special for us because [Corgan] didn't have a vested interest in the band, he just liked the music."
Then again Bad City's seems strangely appropriate when you consider that WELCOME TO THE WASTELAND is all about big rock n' roll fantasies as evidenced in inspiring anthems such as "Call Paul Stanley" and "Do You Believe In Rock 'N' Roll?" "A lot of the lyrics on this record stem from being young and frustrated almost to the point of going crazy, but at the same time it's about release and reminding people that when you go hang out with your friends and party that can help you forget about everything that's bothering you," Schleiter responds when asked to summarize the album's lyrical themes. "We feel like it's been a long time since someone made a huge classic rock record with great musicianship and I think that's something that never goes out of style."
Ultimately while moments on WELCOME TO THE WASTELAND may give a sonic nod to everyone from Kiss to Nirvana, the album itself remains musically relevant and has the ability to crossover to listeners of all ages as long as they share a love for huge choruses and even bigger dreams. "The point isn't to be retro, it's to embody the spirit of what rock 'n' roll bands used to be like before things got so boring and safe," Schleiter says "We just want to bring back the fun to the genre," Perenchio summarizes, "I just can't wait to go on tour so that these songs can be enjoyed in a live setting with everyone singing along. That's what this band is all about."

Welcome To The Wasteland