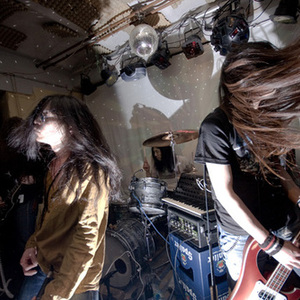 There are more than one band using the name Church Of Misery. The most notable Church of Misery is a japanese doom metal band with a specific extra-groovy sound that is often described as "stoner doom" but the band tends to snub this term saying "We hate trend. We hate corporate attitude. We hate the word 'stoner'. Death to false stoners!! Let there be DOOM!!" (citation from the Master of Brutality album cover artwork notes).

The most notable Church of Misery is a japanese doom metal band with a specific extra-groovy sound that is often described as "stoner doom" but the band tends to snub this term saying "We hate trend. We hate corporate attitude. We hate the word 'stoner'. Death to false stoners!! Let there be DOOM!!" (citation from the Master of Brutality album cover artwork notes).
Band was formed in 1996 in Tokyo by bassist Tatsu Mikami (ex-Salem) and guitarist Tomohiro Nishimura, line-up was completed with singer Nobukazu Chow and drummer Hideki Shimizu. Band's raw and groovy style of doom metal rooted in 70s heavy rock with psychedelic feel and their notable lyrics mostly based on the famous serial killers' characters soon founded out the way into the hearts of the underground metal fans all over the world even though the band didn't play anywhere outside Japan until 2005. Band recorded first album entitled "Volume 1" at their live performance in Tokyo in 1996 for the DOOM RECORDS planning to release it in 1997 but the record company cancelled it fooling people who pre-ordered this album, and then released it as a rare unofficial bootleg. Next 1998 year three songs by Church Of Misery appeared on "Doomsday Recitation" compilation, soon this was followed by "Born Too Late" - the split record with canadian band Sheavy which included Saint Vitus' War Is Our Destiny song cover version. Band participated in the Doomsday Recitation tour and their live performance at Nanba Rockets Osaka venue on 13th of March was filmed, two songs from this footage appeared on a split video-tape with japanese doom metal band Millarca. Same year the Bad Acid Records released band's "Taste The Pain" EP which included Iron Butterfly's In-A-Gadda-Da-Vida song cover version along with their own material. In 1999 Church Of Misery released the split record with british sludge doom legends Iron Monkey via the cult Man's Ruin label, also this year two new songs were released on 10 inch EP "Murder Company" by the Man label. During this period band is working actively recording a bunch of cover versions of the bands' like Death SS, Trouble and Black Widow songs for tribute compilations.
Southern Lord Records signed the band in 2001 and released their first official full-length album
"Master of Brutality" that was featuring new vocalist Yoshiaki Negishi and drummer Junji Narita in February of the same year. Traditionally this release includes cover version of 70s rock legends' Blue &Ouml;yster Cult song "Cities on Flame" and the rest of the songs is devoted to mass murderers. Year later Kult Of Nihilow label released "Boston Strangler" EP both on 12 inch vinyl and mini-CD with quite different tracklists (vinyl version is lacking Candy Man (Dean Corll), CD-only bonus track). The Game Two label collected some of archive Church Of Misery songs and put them on a split album shared with british psychedelic/stoner doom band Acrimony in 2003. On 9th of June, 2004, band's second full-length The Second Coming saw the light of day being released via DiwPhalanx Records. This time "One Way... Or Another" song by Cactus was covered by the band, and the rest of material narrates about five new serial killers. This record also featured band's two new members: vocalist Hideki Fukasawa, also on synthesizers and guitarist Takenori Hoshi. Month later, on 28th of July, Leaf Hound Records released double CD entitled simply "Early Works Compilation" consisting of pre-"Master of Brutality" songs with the addition of previously unreleased "Retal (Howard Unruh)" track. In late 2005 Church Of Misery first toured Europe supporting the European version of "The Second Coming" from Salvation Records.
Video footage of band performing four songs live appeared on DiwPhalanx's "Wizard's Convention: Japanese Heavy Rock Showcase" DVD that also features Greenmachine, Boris and Eternal Elysium, released on 6th of June, 2005. In next two years Church Of Misery recorded material for three split releases with american doom metal bands: two different records with Sourvein, both came out in 2006, one for Calculon Records and the other one for Dadadrumming label, the other one with Deer Creek for Game Two label in 2007, this CD features the newest Church Of Misery band member, Australian guitarist Tom "Satan" Sutton, with whom Takenori Hoshi was replaced. There were also two video releases in 2006: DiwPhalanx Records presented "Houses Of The Unholy" DVD including two music videos ("Filth Bitch Boogie" and "I, Motherfucker") besides the live performance and Salvation Records presented "Live In Red, Eurotour 2005" DVD with seven live videos shot during the band's first European tour, which also includes the music video for Filth Bitch Boogie along with documentaries from various European cities Church Of Misery were playing at. On July, 31st of the same year Leaf Hound Records finally put out unfortunate first album "Volume 1" as an official one; there are two versions of this limited vinyl-only release: "Normal Edition" (limited to 450 copies) and "Die Hard Edition" (limited to 50 copies).
In 2008 Church Of Misery records limited 12 inch EP "Denis Nilsen" which includes Pentagram's "Hurricane" song cover version for Kult Of Nihilow Records and the Leaf Hound Records was going to release their long-awaited full-length entitled "Houses Of The Unnholy", that honestly continues tradition of the previous albums: there are six songs about serial killers and Sir Lord Baltimore's "Master Heartache" song cover version; but the band was not satisfied with final album mastering result and decided to re-record the whole album. It will be available via Lee Dorrian's cult Rise Above record label on 20th of April 2009. Also it was announced that vocalist Hideki left the band shortly after album recording comletion and was replaced with Negishi (who sung on "Master of Brutality") for the upcoming tour dates.

In February 2010 the band will release their first live album on Roadburn Records: Live at Roadburn 2009. This blistering set will first be available only on cd but shortly after also on vinyl.

The original Church Of Misery was formed in 1992 in Bloomington, Illinois, United States by Stevo Dobbins (also known as Stevo De Caixo and Stevo St. Vitus), the vocalist of prominent death metal band Impetigo. The band was playing an unique brand of doom metal with the extreme metal influences, namely death metal and thrash metal. After the recording of "Sorrows Of The Moon" demo the band changed its name to Insomnia in April, 1993.

And Then There Were None...

Houses Of The Unholy