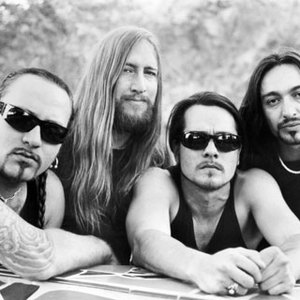 Unida was an American stoner rock band that was formed after the dissolution of Kyuss and Slo Burn. The band originally consisted of John Garcia (vocals), Arthur Seay (guitar), Miguel Cancino (drums) and Dave Dinsmore (bass). Dinsmore was later replaced by Scott Reeder, who was in turn replaced by Eddie Plascencia. Paul Gray of Slipknot also played with the band as a touring bassist. In 1999, the band appeared on a split CD release with Swedish band Dozer.

In 1999, the band appeared on a split CD release with Swedish band Dozer. The Unida portion was titled The Best of Wayne-Gro EP. Later that year, they released their debut full length album entitled Coping with the Urban Coyote on the now defunct Man's Ruin Records.

Relations with their next record company in New Jersey, American Recordings, ended with legal problems. Their second album, The Great Divide, was originally scheduled for release in 2001 but is now in limbo. The album has surfaced on the internet in bootleg form. In a 2002 interview, bassist Scott Reeder spoke out about the delay in getting the full-length album released.

"Everything was set to come out on American via Columbia Records, and you know, we've been meeting a lot of people who've been working on it," he explained. "The artwork was done, everything was looking really good, and then, I guess, (American owner) Rick Rubin had a falling out with Sony, moved the whole label over to Island Def Jam, and apparently, after months of being just strung along ? 'Oh, yeah, the release date got bumped back a little bit' ? finally we found out that somebody at the label didn't like the record, so they didn't want to deal with it. The lawyers had to go back and forth for months and months and months ? a chess game where every move takes two months... 'You have sixty days to reply to this letter'...and...so we just got out of the deal, a month ago."

Since the delay, John Garcia has released three studio albums and one live album with Hermano and toured with the band in the latter half of 2008. In 2004, Unida appeared on the High Times Records' High Volume: The Stoner Rock Collection, contributing the track Left Us To Mold. Garcia is also working on a solo album. Arthur Seay (principal song writer, guitarist) and Mike Cancino (Drums) along with their longtime friend Eddie Plascencia (who also has been filling the bass duties in UNIDA recently) have started a new band called House of Broken Promises (H.O.B.P.). H.O.B.P. have also filmed a video with Rick Kosick (from Jackass fame) to coincide with the release of their forthcoming album "Using the Useless".

Coping With The Urban Coyote

The Best Of Wayne Gro (EP)