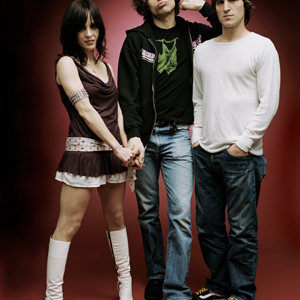 Four albums and a decade into their career, L.A. by way of Illadelphia rockers Burning Brides have practiced their own brand of parapsychology while utilizing what frontman Dimitri Coats has communicated as an ability to ?find pleasure in the pain?. On the trio's latest offering, Anhedonia, the Brides once again display the methods to their madness via a cadre of sugary hooks and blistering riffs.

As with their previous releases, Burning Brides demonstrate the ways in which the different aspects of their musical vision benefit from their mutual inclusion, as the Brides' ability to pummel with brute force contrasts nicely with the pop sensibilities that they continue to hone. Coming on the heels of 2007's bruising Hang Love, the newest Brides album plays as a heavy yet sun-kissed portrait of a band whose continued evolution has allowed them to access unbridled levels of energy and confidence. The Brides have compiled a freakishly good catalogue and sterling reputation for ripping it up live in the years since their inception, but the bond and resulting comfort level between singer/guitarist Dimitri Coats and bassist Melanie Coats have never been more evident than on Anhedonia. The album stands as further evidence of the band's unique talent for incorporating some of their favorite influences while producing a signature sound that remains the backbone of their sonic exploits even as the Brides explore some new facets of that blueprint.

Two elements primarily define Burning Brides' ethos and remain interwoven throughout their catalogue: the willingness to hurtle headlong into caterwauling rock and roll oblivion and the recognition of when to choke back before hitting full-on supernova status. Were either offshoot of the Brides' musical DNA practiced within a vacuum, the overall potency of their work would not be fully realized. While Burning Brides may never be accused of killing anyone softly, they have always had a keen appreciation for the moments when a thunderous riff can be momentarily supplanted with a lilting vocal harmony or serpentine bassline, as the band seem to recognize the value in both headbanging and hip-swaying. Much of this phenomenon can be attributed to Dimitri Coats' voice, as he possesses the kind of range that enables him to evoke ear-bleeding howls that would make Linda Blair blush alongside rhythmic melodies without sacrificing pitch or tone. Perhaps most importantly, Dimitri's voice contains the kind of stomach churning emotive quality that unfurls itself as if it was being transmitted via a previously forgotten dream. His ability to summon different approaches underscores the Brides' overall penchant for going big without losing any resonance, and beginning with the album opener Lovesick, Dimitri calls in some vocal reinforcements in the form of real-life bride Melanie.

Anhedonia marks the first time in the Brides' recorded history that Melanie has joined the fray on the mic, and her introduction to the formula proves seamless, as she lends the proceedings an added depth that ultimately distinguishes this batch of songs from their predecessors. The inclusion of Melanie in the booth is an exciting development for a band already teeming with a seemingly inexhaustible arsenal, and her teaming with Dimitri on tracks like Flesh and Bone points a way in which the Brides will undoubtedly expand that arsenal moving forward. Anhedonia is similarly packed with examples of the ways in which the Brides have gelled over the course of their last two albums. Having endured considerable professional and personal turmoil in the period leading up to the 2007 release of Hang Love, the Coats welcomed drummer Pete Beeman into their inner circle and proceeded to exorcise their demons with a torrent of bonecrushing body blows and knockout shots in which entire nations died, serial killers hit the streets, and all of Mother Nature burned courtesy of Dimitri's imagination. While Anhedonia still possesses the weight of earlier releases, it's refreshing to see the Brides emerge with their fangs temporarily sheathed. Anhedonia definitely packs a punch, but the record serves notice that Burning Brides don't necessarily have to lead with their fists. The songs on this record seem to permeate the space between your ears and worm their way up your veins without going the scorched earth route. Whether it's the upwardly spiraling riff of Summer Leaves or the sporadic bursts of If One of Us Goes Further, the Brides have successfully navigated the feat of producing a guitar-oriented album that most often forsakes nosedives for attempts at flying into the sun. The album explodes in reds, oranges, and yellows, and Dimitri's opening declaration ?What falls apart comes back together/ the body heals with time? stands in stark contrast to some of the themes he has most recently explored while setting the regenerative tone that encompasses much of Anhedonia.

The Brides stay true to their form in allowing the balance of the record to rest upon Dimitri's guitars, and the erstwhile guitar hero helps shape the mood of the record by opting for cleaner guitar tones even as he puts forth some Jimmy Page-esque guitar lines that manage to reverberate without muddying the waters. Dimitri has never had any problems going the overtly (or subversively) anthemic route, but his progression as a songwriter is paramount on one of Anhedonia's standout tracks, This Is a Wave, which emerges as a surf rock elegy that calls to mind the elegant melancholia of Nirvana's All Apologies. Whether they're exploring more nuanced approaches or cranking their pedals in fullscale paint-peeling mode, Burning Brides bring a palpable passion to their songs. The Brides have never been interested in putting rock in quotation marks or trafficking in ironic conceptualization, as Dimitri succinctly surmises in Start Your Own Religion, ?Rock and roll is dead/rock and roll is free/ rock and roll is everything to me?. With Anhedonia, Burning Brides have continued to cement their legacy as proponents of the kind of rock and roll that can render all other pleasures powerless, as they've created an album that aptly showcases their strengths while highlighting a desire to push the boundaries of the qualities that make them so unique. - Brant Miles

Fall Of The Plastic Empire