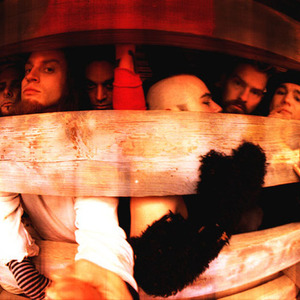 American Head Charge, the Minneapolis-based groove metal / alternative metal band, which had its genesis when Cameron Heacock and Chad Hanks crossed paths in a Minnesota rehab facility in 1997, has up to now been known primarily for the radically dysfunctional behavior of the band members. "We were definitely out of control on our first tour, Ozzfest 2001," Mr. Banks admits. "It wasn't enough to just play our music; we also had to fire shotguns on stage and throw pigheads at the crowd. Chalk it up to a desperate bid for attention.

"We were definitely out of control on our first tour, Ozzfest 2001," Mr. Banks admits. "It wasn't enough to just play our music; we also had to fire shotguns on stage and throw pigheads at the crowd. Chalk it up to a desperate bid for attention." The Head Charge rap sheet - which also includes getting into bloody brawls with their fans, smashing equipment they couldn't afford to replace, reacquainting themselves with hard drugs and occasionally being locked up by the enraged fuzz - has served to obscure the fact that these free spirits play the shit out of their instruments and make brutally powerful music of uncommon distinction.

But this distorted (though hardly inaccurate) perception of the band will likely change with the release of The Feeding, a seething mass of avant metal, nightmare grindcore and moshpit rock that alternates between pummeling ferocity and passages of all-out grandeur. It's a stunning display of primally extreme music that's guaranteed to scare the hell out of your parents.

The album had its genesis during the limbo in which AHC found themselves after touring intensively behind their acclaimed 2001 debut, The War of Art, two years of prolonged exile from the road and ongoing internal tumult that found several band members in a virtual death match with their personal demons. Three guys in the band jumped into the chemical deep end and two of them went back to rehab, guitarist Bryan Ottoson ruefully recounts. "It got so bad I was nearly checked into a psychiatric unit for suicidal behavior."

Inevitably, their struggles begat rage, and that could've paralyzed them. But what sets Head Charge apart is an almost alchemical ability to transform their rage - at the world, each other and (perhaps most of all) themselves - into dark art. Hence, the worse their situation got, the more inspired they became, as singer Cock and bassist/guitarist Mr. Banks - now collaborating with Ottoson and keyboard manipulator Justin Fowler - stirred up a cauldron of new songs and brought them to seething life with drummer Christopher Emery. While the band's old label turned a deaf ear to their bold sonic forays, emerging producer Greg Fidelman, who'd engineered the Rick Rubin-produced first album, embraced the band's new material. The band managed to get out of their deal, and sign with Nitrus/DRT. "Rick Rubin was gracious enough to let us leave American Recordings without hassle. It could have been a litigious nightmare" adds Mr. Banks.

With Fidelman at the helm, Head Charge spent four months on the album, and it evidences an unlikely, previously dormant self-discipline. Tellingly, whereas the sprawling The War of Art ran well over an hour, as if they could barely control their wild-eyed impulses, The Feeding clocks in at a dense 41 minutes, the compression serving to intensify their fury. The opener and first single "Loyalty" sets the record's brutal tone, as Cock spews recriminations with frightful conviction while also revealing a scarred humanity in his natural voice, a captivating tenor that sounds like the troubled emanations of some fallen angel. "Dirty" would be an infectious, balls-out rocker were it not for Cock's Satanic howling, which transforms it into the soundtrack to an exorcism. "Walk Away" delivers a hyper-melodic, gloriously anthemic chorus, then proceeds to hack it to pieces in characteristically deranged fashion. Easy listening this ain't. And yet the closing "To Be Me" achieves something close to serenity, like the eerie calm after a thunderstorm - or a nuclear holocaust. "It's almost hopeful" Mr. Banks acknowledges, sounding like he can hardly believe it himself.

There's a line in "Walk Away" that perfectly encapsulates this tormented but inspired band: "We're dirty and hungry and bitter and tired and broke and bruised and battered," Cock shrieks in agony and defiance, adding, with all due irony, "so happy." Although Cock is the band's primary lyricist, it was Mr. Banks who came up with the words (he admits, quite unnecessarily, that he was in a bad state at the time). Mr. Banks recited the line his partner, who knew right away that it would drop right into the hole he was looking to fill in the song's crucial bridge section. "For a while," Mr. Banks says, "that's what we wanted to call the album - with no spaces between the words. It just says it all."

Also in the cosmic coincidence department is the filigreed, intertwined guitar figure that opens and closes the boldly provocative "Ridiculed," The Feeding's roiling centerpiece. The part is actually two guitars, and the parts were conjured up simultaneously by Ottoson and Cock - in two separate parts of the studio, out of hearing of each other. At the same moment, each of them entered the main room eager to play their new creations to the other band members and Fidelman. Only then did everyone realize that the two parts magically interlocked. Divine intervention. With this crew, that's highly unlikely - unless God has a truly twisted sense of humor (and with AHC there's plenty of circumstantial evidence to support that hypothesis).

Mr. Banks describes his band's dynamic as "a constant battle between Order and Chaos," and that's an apt description of the corrosive yet savagely beautiful sonic onslaught AHC delivers on The Feeding. In the end, Order prevails - if just barely - which is a good thing for American Head Charge and their ever-growing legion of fans. If Chaos had come out on top, this dangerously self-destructive but supremely talented band would've surely imploded, leaving nothing but wrecked gear, lost souls and mangled body parts. Instead, with all their limbs still attached and pulsing with the endorphins of catharsis, AHC will spend 2005 on the road - and this time, hopefully, not the road to perdition.

Bryan Ottoson passed away on April 19th, 2005 in his sleep on the band's tour bus while supporting Mudvayne. Many reports concluded it to be the result of an accidental prescription drug overdose. After being diagnosed with a severe case of strep throat, he was prescribed penicillin and an unknown pain killer. He, unknowingly, developed pneumonia and the strep throat got worse. He was found in his bunk after members of the band attempted to wake him before a performance.

Also, Christopher Emery was fired from American Head Charge onstage on the 11th of February 2006. So who is to say that Chaos isn't prevailing in the long run?

On April 3rd, 2007 American Head Charge will release a CD/DVD combo titled "Can't Stop The Machine". The DVD will feature a complete retrospective of the bands career from the early days signing to Rick Rubin's American recordings, interviews with all band member, performing live on Ozzfest 2001, worldwide tours with Slipknot, Mudvayne, Static-X, and more.

Also a look behind the scene at making both "The War of Art" and "The Feeding" Albums. It will also include all of the bands videos and a special tribute to late guitarist Bryan Daniel Ottoson. The CD will feature live recordings, remixes, and other unreleased material.


Unfortunately, due to lead singer Cameron Heacock's ?inability to continue on a musical career path,? the band disbanded August 11th, 2009.

The War Of Art