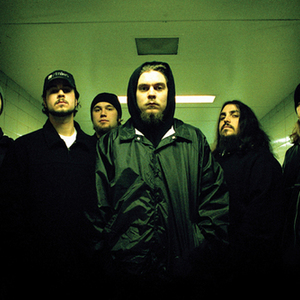 Chimaira (pronounced /ka??m??r?/) is an American metal band from Cleveland, Ohio, formed in 1998. The band is a notable member of the New Wave of American Heavy Metal. Their band name is derived from the word Chimera, a monstrous creature in Greek mythology. They play a style of mainly groove metal, with some metalcore, industrial metal, and death metal influences. Chimaira was formed in 1998 by rhythm guitarist Jason Hager, and vocalist Mark Hunter. The pair recruited Jason Genaro on drums and Andrew Ermlick on bass to complete the line-up.

Chimaira was formed in 1998 by rhythm guitarist Jason Hager, and vocalist Mark Hunter. The pair recruited Jason Genaro on drums and Andrew Ermlick on bass to complete the line-up. Their first EP, This Present Darkness, was released on January 11, 2000, on East Coast Empire records. This EP featured a few songs that were later re-recorded for their major label release on Roadrunner Records, entitled Pass Out of Existence. Jason Hager later left the band after Pass Out Of Existence due to family issues and the band gained Matt DeVries, a long time friend of the band and guitarist for the Cleveland based band Ascension. Pass Out of Existence didn't sell that many records when it was released in 2001, but The Impossibility of Reason, released in 2003, was enough to fund Chimaira's extensive touring with In Flames, and their second-stage performance at Ozzfest, also in 2003.

Musically, Pass Out of Existence had a much more "electronic" sound than The Impossibility of Reason, with Chris Spicuzza's pronounced electronic loops featured in many songs. This sound was often compared to artists like Fear Factory, Spineshank and Slipknot. The Impossibility of Reason kept with a more pure, metal-esque instrumentation, akin to metalcore bands such as Killswitch Engage, and this was found to be very popular--the album reached #2 on Billboard's "Heatseekers" chart.

Their self-titled album, released in August 2005, built upon the progress of The Impossibility of Reason. The electronic feel of Pass Out of Existence and This Present Darkness is much reduced, and the guitar riffs and solos are taking a more central position to the band's music. The band hired Kevin Talley (Dying Fetus, Misery Index) to fill position behind the drumkit.
The themes of "rejection, revenge and repercussion" [1] from The Impossibility of Reason remain, although there are exceptions here - the track "Lazarus" is named for, and written about a friend of Mark Hunter's (singer) commiting suicide. In mid-2006 Chimaira and Roadrunner announced they would amicably part ways.

On March 6th, 2007, Chimaira released "Resurrection" on Nuclear Blast/Ferret Records, with some special packs containing a DVD of the making of the album. Andols Herrick returned to the band, and musically the album is an evolution of previous efforts. The songs feature heavy and pounding riffs, as in the likes of "Chimaira", but also features more thoughtful melodic parts and, what can be considered, more progressive solo parts and arrangements. Also from Chris Spicuzza on keyboard there is a heavier contribution than on the last album. The band even manage to create a black-metal-esque song with the help of Morgoth The Impaler on keyboards. Unsurprisingly, the song "Resurrection" was written about the new lease of life the band (especially Mark Hunter) felt upon release from Roadrunner, who they felt, were not promoting the band as much as the band felt they deserved.

Before the release of the album, The Infection (2009), the band had been posting short clips on their web page from the upcoming album, which was written in Cleveland, Ohio with producer Ben Schigel, who previously produced the band's album The Impossibility of Reason and their self titled album. The Infection was mixed by Zeuss, who mixed and produced albums for Hatebreed and Shadows Fall, and was released on April 21, 2009. At its annual Chimaira Christmas show on December 30, 2008, they debuted a new song entitled "Secrets of the Dead."

The first single off The Infection was "Secrets of the Dead", which was released March 3, 2009. The Infection debuted at number 30 on the Billboard 200. During a number of European tour dates supporting The Infection, Chimaira had Emil Werstler of D??th filling in for Matt DeVries, as DeVries' girlfriend had their first child.

The 10th annual Chimaira Christmas show was held at the House of Blues in Cleveland Ohio on December 27, 2009 and was filmed for a live DVD titled Coming Alive, which was released in 2010.

In late 2010, bassist Jim LaMarca retired from the band. Chimaira released the following statement regarding his departure "After a decade of good times and achievements, our friend and band mate Jim LaMarca [bass] has decided to retire from CHIMAIRA. We wish him nothing but the best as he settles in and starts a family. As for seeking a replacement? we'll cross that bridge down the line. In the meantime, consider it 'business as usual' with the CHIMAIRA you know and love." The band tapped Werstler once again, this time to replace LaMarca as a member of the band on bass.

By mid 2011, more lineup changes would occur. On April 5th, keyboard player Chris Spicuzza announced his departure from the band, citing a "negative environment and the general state of the music industry." A week later, drummer Andols Herrick also announced his departure. He stated he was asked to leave due to "differences." He also stated the band members had parted on good terms. Later in the year, it was announced that the annual Christmas show would be the last for guitarists Rob Arnold and Matt DeVries. Werstler was slid over to guitar duties and Jeremy Creamer, also of Daath, was brought in to replace him on bass. Matt Szlachta of Dirge Within was chosen to fill the other vacant guitar spot. Austin D'amond of Bleed The Sky and Sean Zatorsky of Daath have taken over drums and keyboard duties respectively.

The Age Of Hell (Deluxe Edition)