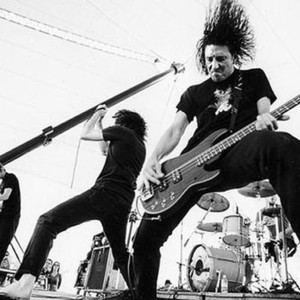 Will Haven is a sludge / noise metal band from Sacramento, CA, USA that formed in 1995. The band was formed from members of Sock, a band that was formed with Shaun Lopez of Far, and is named after a fictional, self created character. Will Haven's debut self-titled seven-track EP was released in 1996 to positive reviews. A year later the quartet was signed to Revelation. Singer Grady Avenell guested on two Far tracks - 9 Miles, and a cover of Band Aid's Do They Know It's Christmas Time? with Chino Moreno of Deftones.

1997 saw the release of full-length El Diablo bringing them an increasing amount of attention and a growing fanbase. In 1999, they released WHVN, arguably their heaviest album to date. The song Jaworksi is named after Red Tape frontman and friend Jeff Jaworksi, who was Jeff Irwin's guitar tech at the time; and Slopez is named after Shaun Lopez, who was the guitarist for Far. During this time, the band recorded a track called The Regulator for the Bad Brains Never Give In tribute album, and toured with Deftones throughout Europe.

In 2000, long-time drummer Wayne Morse left the band. He was replaced by Mitch Wheeler. Later that year, Grady guested on Soulfly's track Pain, to be featured on the album Primitive. Chino Moreno also guested on that track.

Singer Grady Avenell left not long after the tour, to raise a family and attend college. Haven released a DVD called Foreign Films featuring what, at that point, was to be their last ever show in January 2002 - in a small coffeehouse in their hometown of Sacramento, called The Capitol Garage - and a wealth of footage from the final tour. Members of the band went on to form Ghostride, The Abominable Iron Sloth, and Death Valley High, as well as their own label, Distruktor Records.

On October 12, 2005, Will Haven officially regrouped and began writing new songs with original singer Grady and had initially planned to release a five-song EP with B-sides; however, during the writing process, the band decided to put out a full-length album. Haven, now a five-piece with guitarist Cayle Hunter from Ghostride and Oddman fame, went to Los Angeles to record 12 songs for the new album; guitarist Jeff Irwin told Rocksound: "If this is the last record we ever do, then i want it to be our ultimate one -- the one that's absolutely perfect".

In January 2006, Haven returned to the stage with a show in Sacramento's Boardwalk. In February, new song Handlebars To Freedom was uploaded to their MySpace profile. In March, they traveled to the UK, for a co-headlining tour with Crowbar. Grady was announced unable to perform at the Will Haven dates in Glasgow and Newport, due to problems with his wife in Paris, so Simon Neil of Biffy Clyro, Craig B of Aereogramme, Mikey Dee of Skindred, Crowbar frontman, Kirk Windstein and XSheepX of The Seventh Cross were asked to do guest vocals for both nights. Grady rejoined the band at the following dates. The band had plans for tours through Europe, Australia and a summer tour with the Deftones, but so far, this hasn't happened yet.

As of August 2006, Will Haven has signed a record deal with indie label Bieler Bros. Records. The demos that have been online won't appear on this record. One of the demos, Handlebars To Freedom, will appear on a compilation disc of new Australian label Static Migration Records. Second guitarist Cayle Hunter was kicked out of the band and is now focusing on his new band, called Armed for the Apocalypse.

On February 19, 2007 Will Haven played a free show at the Troubadour in Los Angeles, promising a 'big announcement' would be made at the show - namely that Grady Avenell had left the band and been replaced by longtime friend of the band (and vocalist for Sacramento punk band Red Tape) Jeff Jaworski. In Spring 2007, the band went to Europe with Deftones.

The band released the album The Hierophant on June 18, 2007 (UK) and June 19, 2007 in the US. A post made by guitarist Jeff Irwin on an unofficial message board stated that the band intend to tour the new material later on in 2007. A Headline UK tour eventually followed in November 2007 without Mike Martin on bass; however no explanation has been given for his absence. Bass duties for the tour were covered by long-time friend Rey Osburn.

In September 2008 Will Haven embarked on a headlining European tour with French band My Own Private Alaska and further support differing per city. Again Rey Osburn played bass, as Mike Martin was raising a family.

On October 12, 2009, the following was said about Grady rejoining the group : "After a little time off and doing a few benefit shows for our brother Chi Cheng of the Deftones, we are back to work. As some of you may have seen Grady did join us for a few of the benefit shows we did for Chi and also an amazing show in San Francisco a few months ago. After those shows we had a few dicussions about will havens future and Grady expressed that he would like to be a part of it. So after working out details I am very happy to say that we are currently working on a new record with Grady handling the vocal duties. Jeff Jaworski will still be a big part of the band and helping with the writing process on the new record. So we are more than excited to be all working together on making an amazing record."

In April 2010, the band announced that Chris Fehn of Slipknot would be assuming bass duties for their upcoming album and tours, replacing Mike Martin.

Open The Mind To Discomfort (EP)

The Best Song On Here (EP)