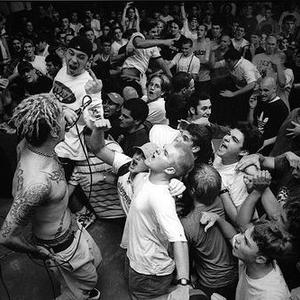 Vision Of Disorder is a NYHC band. Starting out in 1992 as a band from Long Island, NY that covered music from The Doors, Vision of Disorder were way ahead of their time. In 1993, Vision of Disorder (VOD to fans) toured around New York and released several demos, at times, without a bassist. Fast-forward to 1996, VOD signed with Roadrunner Records where they released two full-length albums. After problems with the label, they continued to tour and released For The Bleeders on Go Kart Records, which was a rerecording of demos...

VOD went on to form Bloodsimple in 2002 by vocalist Tim Williams and guitarist Mike Kennedy. Bloodsimple was originally planned as a V.O.D side project, but ultimately became the main project after dissatisfaction with the direction of V.O.D led it into an extended hiatus.

In late October 2008, after years of sporadic reunions, Blabbermouth.net announced that Vision of Disorder had in fact reunited and planned to record a new studio album for release in Summer or Fall of 2009.

As of July 2009, the band is still hard at work writing new material with nine or ten songs written. They've already recorded one demo with plans to record a second that they will shop to record labels. The new material has been described as very Imprint-like with newer sounds as well as some classic hardcore tones.

In March 2010, Tim Williams confirmed that the band has had a short break, but they have managed to write about 19 songs from which they are picking about 11 to the new album. They hope to get the album out within the next 6 months.

In August 2010 the band revealed via an interview with Horns Up Rocks that they will begin recording five new songs in the next few weeks to shop to interested labels. Further plans have the group officially beginning the recording of their next album in the winter. An early 2011 release date is currently being eyed.

Vision of disorder began playing together in 1992, in Long Island New York. VOD's first show was a battle of the bands show, and after a short period without a drummer, recorded their first Demo CD, "Formula For Failure." This Demo built an underground following in Long Island. They proceeded to release a split 7' inch with 'Loyal To None'. This also helped them build more fan base, all before 1994. The odd thing is that from 92-95 VOD didn't have a bass player, and were doing shows for 5-600 people. Eventually through a friend they adopted Mike Fleischmann into the band. In 1995, just before Mike F. joined, VOD release 2 more songs on a compilation album called "New York's Hardest." This album reached foreign shores and gave VOD some exposure.

1995, the CD "Still" is released [on Striving for togetherness records]. VOD plays PWAC (a now shut-down NY venue) and 2,000 people show up. Ray Cappo of the band Shelter tells VOD he has a new compilation album coming out on roadrunner records, and that they are going to put 2 songs on it. VOD records newer songs onto it- "Element", "Way's to Destroy One's Ambition", and "Divide". Roadrunner liked their work and signed them; But the compilation wasn't released. VOD proceeds to work on recording their self-titled album, while doing shows and building popularity. October 22, 1996, their self-titled CD is released. The CD features work spanning from 93-95, and production quality isn't quite what it should be. VOD knows they have to make a more professional sounding album. During the year and a half (96-98) of promoting and touring their self-titled CD, VOD tells their fans "Watch what we can do next time."

Ozzfest 97, VOD tours promoting the self-titled. VOD sits by watching mainstream bands rake in cash and popularity, while they don't. Instead of using another bands sound to motivate them, VOD used that touring experience to inspire the "Imprint" CD. During the touring the realized they had to truly focus to become an awesome band. In between the Ozzfest shows, VOD and others did smaller venue Gigs. During this time Phil Anselmo of Pantera formed ties with VOD.

After Ozzfest, VOD tours and headlines the entire country. After that they toured Japan. They came home and took a little time off, then began work on the Imprint album. They wanted the album to heavier, but also have more structure. VOD wrote the songs for imprint together, constantly changing and fine-tuning them all until the album is released. For the first time Mike F the newer bassist lends his skills to the writing. The songs are much less rushed than VODs previous work. The first song written was 'imprint', no doubt setting a tone for the rest of the songs to follow. A unique underlying sound begins to form as songs like "colorblind" and "up in you" are written. About halfway through the album there was a sort of road bump. Once "What You Are" was written however, it gave them the direction they were looking for to finish the second half the album. "Jada Bloom" was the last song written for the record, but before it could be finished, Phil Anselmo stepped back into the picture. Tim, whom had become friends with Phil, called Phil up. "Yo, do you want to do a song with us?". He answered yes of course. Vision was trying to write a song worthy of Phil, and having difficulty. Eventually Matt the guitarist comes up with the main riff for 'By The River' and the band writes the rest together, only a few weeks before the recording date. VOD records instruments first, then Tim's vocals, and finally Phil adds his vocals. Dave Sardy (chilli peppers, slayer, skeleton key) helped VOD produce this beast of a record in only 19 days. Imprint is released on July 14th, 1998.

VOD is a pioneer band of hardcore. As the scene is mutilated by Mtv and 15-year-old punk ass kids, they will Forever stand out. VOD exposed me to hardcore, oh so many years ago, and I cannot imagine what my life would be like if not for that. Vision of Disorder has since broken up, but has left behind timeless music and passion. This album will always be my favorite album of all time, there is no bad song on it, and it has good replay value. There are no catchy hooks or generic breakdowns on this album, just straight up in your face metal that isn't afraid to take a step beyond the norm/expected.

Razed to the Ground

From Bliss to Devastation