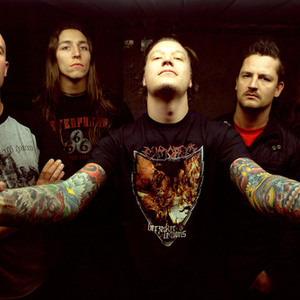 Hatesphere is a death/thrash metal band from Aarhus, Denmark. The group consists of Esben "Esse" Hansen on vocals, Peter "Pepe" Lyse Hansen and Jakob Haagen Nyholm on guitars, Mikael Ehlert on bass and Mike Park on drums. Mikael Ehlert and Anders Gylden?hr left the band May 2007 after supporting Megadeth at Vega, Copenhagen The group formed in 1993 originally under the the name Cauterized then Necrosis but after their demos they changed the name to Hatesphere.

Mikael Ehlert and Anders Gylden?hr left the band May 2007 after supporting Megadeth at Vega, Copenhagen

The group formed in 1993 originally under the the name Cauterized then Necrosis but after their demos they changed the name to Hatesphere.

2001 was the year where a dark and aggressive sphere began to expand from the high north! This was the year where the self-entitled debut from Danish agro thrashers Hatesphere was released upon the world. The unique mix of aggression, groove and melody quickly established Hatesphere as the leading act in Danish metal.

In 2002 Hatesphere entered the Jailhouse studio to record their 2. album "Bloodred Hatred" which showed the band from a faster and more melodic edge with blistering guitar solos and a wide range of vocal abuse! The band was clearly drawn towards a more complex, aggressive and catchy thrash metal approach compared to the debut. "Bloodred Hatred" won the Danish Metal Award 2002 for "Best Album".

After a massive amount of concerts and tours around Europe with bands as The Haunted, Testament, Mnemic and Mastodon, Hatesphere once again entered studio to record a mini cd with the remarkable title "Something Old, Something New, Something Borrowed and Something Black". Again, lots of concerts were played, and on stage the band showed a high-energy performance that blew away both audience and press. In 2003 Hatesphere won the title as "Best Live Band" in the Danish Metal Awards. 2004 Hatesphere once again entered the Jailhouse studio to record their 3rd album called "Ballet Of The Brute". Once again, the sphere gained another layer, as the record turned out to be a lot more aggressive and straight-in-your-face brutal than the earlier albums - but still with the significant touch of melody and groove that represents the Hatesphere sound.

This time the band hooked up with all time thrash kings of Exodus for an extensive tour of good ol' friendly violent fun! The Summer Of The Brute 2004 also took the band to new territories as they toured with New Orleans sludgecore veterans, Crowbar. After thrashing the hell out of festivals all over Europe, Hatesphere returned to the high north to write new material. The new stuff resulted in "The Killing EP" which was meant as an appetizer for the forthcoming album that was scheduled for recording only 5 months later?

During those 5 months, Hatesphere choose to tour for 3 months with Kreator, Dark Tranquility and the mighty Morbid Angel, and then take 2 intensive months to write the new thrash powerhouse ? ?The Sickness Within?. Intense must be the best word to describe this process, and the album clearly portraits a band that works best under stress, as the result is 11 tracks of over-the-top thrash metal anno 2005!

With the release of ?The Sickness Within? in September through their new label SPV/Steamhammer, Hatesphere set new standards in modern-thrash. The metal community in their home country not only pushed them into the album charts the first week it hit stores, but also awarded them ?Album of the Year? and ?Best Production? at the 2005 Danish Metal Awards!!!! Hatesphere and ?The Sickness Within? were nominated in five catagories, and won the two most important!

This album took the band out on tours with Soilwork, Constructdead, Chimaira + lots of other great bands. Once again, the band proves that nobody delivers the metal as deadly in concert as this Danish quintet? to be continued

In early 2007 Hatesphere released their 5th studio album Serpent Smiles and Killer Eyes, which took them to China as the first European metal band in China.

In late 2007 the front man Jacob Bredahl, and the rest of HateSphere decided that Jacob shouldn't be the singer of the band anymore. Jacob has later said that his leaving was due to losing the "fire" for HateSphere.

In early 2009 HateSphere released their 6th studio album "To the nines" on Napalm Records - the album later won the "Album of the year" award at the Danish Metal Awards!

2010 then marked the year, where HateSphere for the first time played North America, following first The Black Dahlia Murder and then Nevermore through the continent!

Ballet Of The Brute