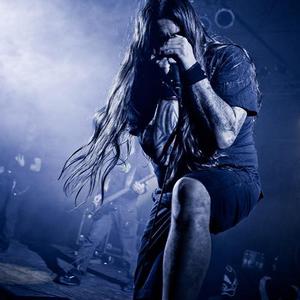 Originating from Bruneck, Italy, Graveworm are a melodic/symphonic black metal band with influence of gothic metal. They were formed in 1997, and are themed towards sadness, death, love and occult. Even before Graveworm released any demo they got signed by Serenades Records, who saw an incredible show of the band close to their hometown Brunico. A demo was produced straight after, featuring classic hymns like "Eternal Winds" or "When The Sky Turns Black", which were featured on their debut album "When Daylight's Gone".

Even before Graveworm released any demo they got signed by Serenades Records, who saw an incredible show of the band close to their hometown Brunico. A demo was produced straight after, featuring classic hymns like "Eternal Winds" or "When The Sky Turns Black", which were featured on their debut album "When Daylight's Gone". A great album, even more in the Gothic Metal vein, which increased a huge interest within the scene. A tour with Crematory, Therion & Lake of Tears followed and proved the enormous power the band creates on stage. Shortly after the tour the MCD "Underneath The Crescent Moon" followed, featuring the bands hymn "Awaiting The Shining", as well as the classical version of the track "Awake" sung by Sarah Jezebel Deva (CoF and Therion), who became close friends with the sympathic Italians after their tour. A video for the track "Awaiting The Shining" was produced, featuring a documentation done by national Italian TV, who made a road report about the band when they played the Serenades Records festival along with Haggard and others.

Graveworm soon became popular, played the Wacken Festival in 1998 and started the songwriting for their second album "As The Angel Reached The Beauty", released in 1999. A German tour with Mystic Circle, Stormlord and Suidakra was done, followed by an European tour together with Agathodaimon and Siebenb&uuml;rgen, as well as festival shows at the "Wave Gotik Treffen" and others.

In 2001 "Scourge Of Malice" was released, featuring their most brutal material, including the Iron Maiden cover, "Fear Of The Dark", which was released on the "Tribute To The Beast" compilation. A first headliner tour was played, supported by Vintersorg, Dornenreich and Darkwell, which turned out to be very successful. The band played the "Summer Breeze Festival 2001", as well as a headliner show at the Italian "Badia Rocks" in 2002. Graveworm decided to sign with Nuclear Blast and started the production of their fourth album "Engraved In Black".

The record was produced in March/April at Stage One Studio with Andy Classen (Die Apokalyptischen Reiter and others), who did an incredible job once again. "Engraved In Black" became an even heavier and more intense record compared to the band previous ones, but still with all typical Graveworm trademarks. Vocalist Stefan Fiori screams and growls as if his life would be in danger. Tracks like "Legions Unleashed" or "Renaissance In Blood" are among the best tracks ever written by the italian band. Once again Graveworm did another cover-versions, "It's A Sin" of the 80's Pop act Pet Shop Boys and "Losing My Religion", originally by R.E.M.

At 2007 Graveworm releases another album called "Collateral Defect" with one cover, "I Need A Hero", originally by Bonnie Tyler.

When Daylight's Gone & Underneath the Crescent Moon

As The Angels Reach The Beauty