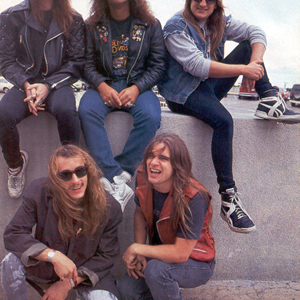 There is more than one artist with this name: 1) Exodus is one of the first thrash metal bands to come out of the bay area, formed in 1980 in San Francisco, California, by Kirk Hammett, Tom Hunting, Paul Baloff, Jeff Andrews, and Gary Holt. They were cited as major influence by pretty much every thrash band. Known for their aggressive brand of thrash, as opposed to the more melodic, NWOBHM rooted thrash sound of the likes of Metallica, and equally aggressive live shows.

1) Exodus is one of the first thrash metal bands to come out of the bay area, formed in 1980 in San Francisco, California, by Kirk Hammett, Tom Hunting, Paul Baloff, Jeff Andrews, and Gary Holt.

They were cited as major influence by pretty much every thrash band. Known for their aggressive brand of thrash, as opposed to the more melodic, NWOBHM rooted thrash sound of the likes of Metallica, and equally aggressive live shows.

At their prime (83-86) they were known as 'Kings of the Bay (area)', with practically no band daring to headline over them at the bay area.

Exodus is currently touring in support of the newly released album "The Atrocity Exibition: Exhibit A".

In 1983, founding member Kirk Hammett left to join Metallica and was replaced by Rick Hunolt and Rob McKillop replaced Andrews on bass. This lineup released the classic title Bonded by Blood (1985) cited as an influence on up-and-coming bands of the era.

Shortly before the release of Pleasures of the Flesh (1987), Paul Baloff left and was replaced by Steve "Zetro" Souza, who also sang for Legacy, which developed into Testament.

The line-up remained stable for the next few albums, but the band never garnered the success of their peers, such as Metallica and Megadeth. After two fairly heavy releases (Fabulous Disaster and Impact is Imminent), the band released their first live effort, Good Friendly Violent Fun.

After its release, the band toured off and on for a year and released another studio album, Force of Habit. This was quite a departure for the band, containing several slower, heavier songs with less emphasis on the speed/thrash basis of their older material. A prime example of this is the 10-minute-plus opus "Architect of Pain" - probably the slowest song Exodus ever recorded.

After a few quiet years when heavy metal itself was going through many changes, Exodus released only another live effort, Another Lesson in Violence featuring the return of vocalist Paul Baloff. Exodus disintegrated again, partly due to a falling out with record label Century Media over the way the live album was promoted, and over an aborted attempt at a live concert video which was filmed but never released due to a financial dispute.

In 2001, Exodus reformed again, initially to play the Chuck Billy benefit, the Thrash of the Titans mega concert. There was talk of recording a new studio album and the band continued to play local gigs in and around the San Francisco Bay Area. on february 2002 Paul Baloff suffered a seizure/stroke leaving him physically but not mentally dead. his family wishing his peace decided to pull the plug. Former vocalist Steve Souza was recruited back into the band to finish the rest of their concert commitments.

Although it appeared to outsiders that with Baloff's death Exodus would cease to exist, guitarist Gary Holt was determined to release a new studio record. The result was 2004's Tempo of the Damned released on Nuclear Blast Records. An oddity of the recording sessions was that one track, "Crime Of The Century", was dropped under mysterious circumstances. The song chronicled Exodus' time under Century Media (of which Nuclear Blast is a subsidiary). Although it was publicly denied, rumors swirled that Century Media forced the song off the record. "Crime" was replaced with "Impaler"; a song written back when Kirk Hammett was still in the band, and which was featured on the Another Lesson In Violence live record.

In 2005, Hunolt decided to leave the band to concentrate on his family life, although Holt claims it was because of his supposed meth addiction. He was replaced by Heathen guitarist Lee Altus. Tom Hunting also left, citing medical problems, and was replaced by Paul Bostaph, formerly of Forbidden, Slayer and Testament, among others. Souza also left under disputed terms in 2005, and was replaced by Steev Squivel (ex-Defiance and Skinlab), and then Rob Dukes, whose first recorded performance for the band is 2005's Shovel Headed Kill Machine. The ensuing tour for the latest album has led to extensive touring of the US and Europe, as well as Japan, their first-ever visit to Australia and much more.

4) Exodus was Finnish melodic metal band, which was formed in 2003 and split in 2005. They released two demo songs.

5. Exodus is Jo?o Peixe, borned in 30/7/1988, in Macau, living in Almada, is a portuguese artist in the psychedelic trance scene nowadays. This artist started to ear and getting interest in psy-trance in 1999, but in 2000 Jo?o started to produce some original psychedelic sounds. With 12 years old, this kid was rising in audio comprehension, and he started to fulfill his fantasy of being a person who can do his own sound with his own style. Finally, in the end of 2005, he bought his 1st apple computer, a Powermac G5, and he bought Logic Pro 7.2 , and with this change, he actually did a great jump in his evolution scale, starting to made a kind of sound that expresses aggressive, rush, using arabian melodies, funny brakes, and serious kicks, basslines and rythms. Exodus is established on Pukka Music, Hypergate Records and Good Trance Records.

8) Exodus is a rapper from Serbia.

Blood In Blood Out

Exhibit B The Human Condition

Let there be Blood

The Atrocity Exhibition (Exhibit A)

The Atrocity Exhibition - Exhibit A

Tempo Of The Damned