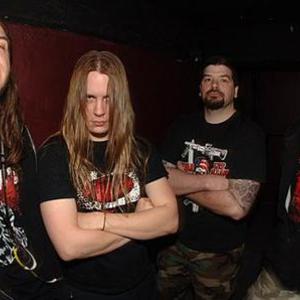 Skinless was a brutal death metal band from New York, USA. They formed in 1992 by vocalist Sherwood Webber and guitarist Noah Carpenter. Undergoing countless line-up changes early on, the band finally stabilized with the arrival of bassist Joe Keyser and drummer Bobby Beaulac prior to recording 1998's Step-Up debut release "Progressions Towards Evil" in 1998. The album scored high marks with both fans and critics, and constant touring behind acts like Mortician and Incantation led to a deal with relapse records.

They recorded their second album "Foreshadowing our Demise" in 2001. By then, the band had begun adding discreet melodies and varied rhythms to their once furiously full-speed assault.

In 2003, much improved on this direction album called "From Sacrifice to Survival" featuring Origin drummer John Longstreth temporarily stepping in for the sessions while Beaulac joined the band permently. In 2005 Sherwood Webber left the band and was replaced by Joe's brother, Jason Keyser.

South Glens Falls, New York, United States
1992
In 2006, the band released their highly anticipated album "Trample The Weak, Hurdle The Dead" which combined incredible machine like drumming from Bob Beaulac, crushing furious riffs from Noah Carpenter and unworldly screamed, growled vocals from Jason Keyser. This has seen the band progress and produce much more maintained material than before. The album was the third release under Relapse Records.
In April 2011, Skinless officially split up, but soon after announced a farewell performance at Maryland Deathfest 2011. All the members are continuing as musicians in other bands.

Only the Ruthless Remain

Trample The Weak, Hurdle The Dead

From Sacrifice To Survival