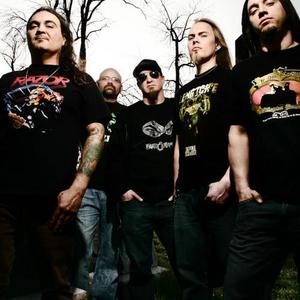 Formed in Denver, Colorado, United States Cephalic Carnage has set out to break down musical barriers by raising both the expectations and standards of extremity in heavy music. A unique musical hybrid, Cephalic Carnage thrives on integrating experimental aspects into their unique, forward-thinking style. In 1998, the band released their debut album, ?Conforming To Abnormality' and instantly hit the road in support of the album.

In 1998, the band released their debut album, ?Conforming To Abnormality' and instantly hit the road in support of the album. The band laid waste to metal fans nationwide with crushing sets at the Milwaukee Metalfest, Dallas Grindfest, March Metal Meltdown, Ohio Deathfest, and the November To Dismember, stopping at nothing to bring their futuristic sounds to the masses.

In December 1999, Cephalic Carnage recorded their Relapse debut, ?Exploiting Dysfunction'. Shortly after, their U.S. tour with labelmates The Dillinger Escape Plan showcased some of extreme music's most forward-thinking and jaw-dropping live acts. Cephalic then amazed the crowd at the 2002 SXSW Festival in Austin, TX (alongside labelmates Mastodon and High on Fire, debuting new material in front of a crowd of unsuspecting music fans.

In 2002, the band unveiled 'Lucid Interval,' a high-impact dose of unique sounds combining various styles of heavy music with elements of jazz-fusion and an ultra-keen sense of progression. Recorded by longtime friend Dave Otero, ?Lucid?' accelerated their creativity while delivering a thought-provoking eye-opening to the musical status quo. Press accolades poured in upon the album's release (being described as ?insanely gifted? by AP) and the band hit the tour trail yet again.

Cephalic Carnage hit the road as part of the 2003 Relapse Records Contamination Tour (with labelmates Mastodon) before joining up with Shadows Fall, Unearth, and Hatebreed for U.S. treks. Cephalic finished off the 'Lucid Interval" World Tour with European runs with Exhumed and Macabre.

With ?Anomalies', Cephalic once-again made an impression upon the press world with terms such as ?progressive and pulverizing? (Revolver), ?challenging? (Rock Sound), and ?inventive? (Decibel) swirling around the album's release in March of 2005.

'Anomalies' was backed by endless touring from the band. Touring that included headlining North American and European tours and appearances at Independence D Fest (Japan), SXSW, New England Metal and Hardcore Fest, and many more. Cephalic was in the company of the up-n-coming metal-elite during these tours including Mastodon, Shadows Fall, High on Fire, Origin, Strapping Young Lad, The Black Dahlia Murder and more.

The first music video from ?Anomalies', for the track ?Dying Will Be The Death of Me?, also exposed the band in the TV medium for the first time ever. Appearances on worldwide music television shows, including MTV2's ?Headbanger's Ball?, the FUSE network's ?Metal Asylum?, and more, exposed the band to legions of new fans.

Winter of 2006 saw the band completing work on their own Denver based recording studio, creating a very nurturing home to incubate ideas for their brand new full-length, ?Xenosapien'. To record ?Xenosapien', the band called upon Dave Otero once again to produce and engineer the record. ?Xenosapien''s mind-bending, technical insanity/mastery collides head on with the band's brutal metal roots to form their most immediate, hard-hitting, and finest album to date.

?Xenosapien' is set for a May 2007 release date and sees these unconventional visionaries ready to lead metal well into the 21st century.

Perversion... And The Guilt After