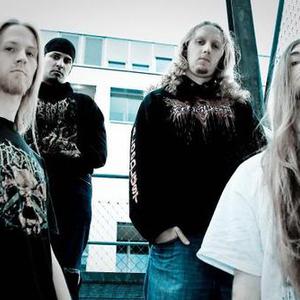 Defeated Sanity was formed in 1994 in Dachsbach, Bavaria as a project of Wolfgang Teske (guitar) and Lille Gruber (drums) with the intention to play the most brutal and intense death metal possible. The band started playing shows in 1996 with the help of session musicians Jonas Gruber (bass) and Robert Colnik (vocals). With this line-up the band also recorded the two demos "Devoured By The Black" (1996) and "Withdrawn From Beauty" (1998).

The next step was to find musicians able to play the very complicated songs, and they ended up being Tino K?hler (bass) and Christian M?nzner (guitar). In 2001, Czech label GRODHAISN PRODUCTIONS released a split CD with Defeated Sanity (with Marcus Keller doing vocals) and Poppy Seed Grinder. Also recorded in 2001 was the ?Collapsing Human Failures? contribution to the Split 7? EP with Imperious Malevolence, which would be the last recording featuring guitarist Christian M?nzner (who then became part of Necrophagist).

In late 2004, the band released their debut full length album, ?Prelude to the Tragedy? on UK label Grindethic Records.

Defeated Sanity underwent further line-up changes with Jens Staschel joining on vocals, Christian K?hn on guitar, and Jacob Schmidt on bass. In August 2006, the band entered Soundlodge Studios and recorded their second album, ?Psalms Of The Moribund? which was released in early 2007 on Grindethic Records.

After Psalms Jens left. Then on 9th July 2008 founding member Wolfgang left Defeated Sanity, Wolfgang's reason being that he could no longer keep up with second guitarist Chistian Kuhn. In the official statement by Lille it was made clear that the band still deeply respected Wolfgang and his contribution to Defeated Sanity saying, "You will always be a part of DS, no matter what! My deepest admiration goes to your musical and overall wisdom and skill."

Defeated Sanity began looking for a replacement vocalist as soon as Jens left so they could continue touring but in the abscence of a vocalist the wrting process was begun. On 26th June 2009 AJ Magana (Ex-Disgorge,Ex-Despondancy) was announced as the new vocalist (via myspace). Soon after this Defeated Sanity embarked on a European headlinging tour, however this tour was completed without AJ as he was deported by UK customs officers for improper paperwork. Defeated Sanity re-toured the UK in February 2010 and AJ was again deported.

April 2010 Saw the release of "Chapters Of Repugnance" on Willowtip Records to exceptional reviews, this was backed up by a series of festival shows. On the 12th of September 2010 founding member Wolfgang Teske died.

Psalms Of The Moribund

Prelude To The Tragedy