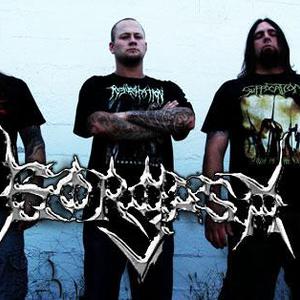 Gorgasm is a brutal death metal band formed in 1994 in Chicago, Illinois, USA. They released three albums and are well known for their shocking cover art and explicit lyrics dealing with controversial things such as coprophilia, necrophilia, mutilation, sodomy, murder, sex and any combination thereof. Masticate to Dominate apparently told a tale through the eyes of a sadistic, psychopathic, serial killer while "doing things" to corpses. They have recently become a three piece after one group member left, and they intended to continue with this set up for their next albums.

However, according to their Myspace, they appear to have broken up in December 2008, after being dormant for a long period.

There was a second band from France called Gorgasm, but they changed their name to Gorod.

A third band named Gorgasm existed in China. They changed their name from Cervical Erosion to Gorgasm (and released "Addicted to Castration" under this name on the Resurrection of the Gods III compilation) and finally to Hyonblud