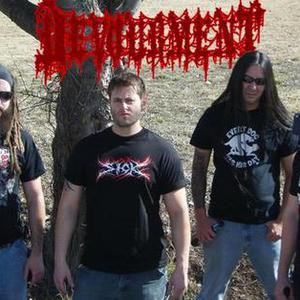 Devourment is a brutal death metal band that was formed in 1995 after the demise of local Dallas based death metal band Necrocide by drummer Brad Fincher and guitarist Braxton Henry (both from Necrocide) along with vocalist Wayne Knupp. Wayne decided to move back to his hometown of Chicago, Brad moved to San Antonio, TX to get his education. Months later both Wayne and Brad moved back to the Dallas area and decided to continue the life of the band.

Wayne decided to move back to his hometown of Chicago, Brad moved to San Antonio, TX to get his education. Months later both Wayne and Brad moved back to the Dallas area and decided to continue the life of the band. However, Braxton Henry had in the meantime already formed a band known as DeadIndustry. Luckily Wayne knew Brian "Brain" Wynn who he used to actually play with a few years before. So after finally contacting him, Brain was introduced to the band whom musically, he clicked with instantaneously.

Soon the trio put out a 2-song promo, which featured Shroud Of Encryption and Festering Vomitous Mass. Several months later with the additions of then guitarist of Sintury Kevin Clark, and underground artist Mike Majewski, Devourment recorded one more song, Choking On Bile, which would be added to the 2-song promo resulting in the 1997 demo released by Corpsegristle Records that gained such a tremendous fan base. The demo would be entitled Impaled.

Wayne Knupp decided to leave the band due to some internal problems leading up to and during the trip to New York. Brain phoned Wayne and fired him from the band as soon as Wayne got back from being left in New York by the band. The band would have a hard time finding a new vocalist, somebody who could most importantly, compare with Wayne's brutal vocal. Their choice would ultimately be guitarist/vocalist of local band Detrimental, Ruben Rosas. Ruben of course was heavily influenced by Wayne in the first place.

The band then landed a record deal in 1999 with United Guttural Records and released the debut CD Molesting The Decapitated. After playing show with such bands as Macabre, Deaden, Cephalic Carnage and Fleshgrind, Ruben was arrested as a fugitive from justice. Ironically this was also the same night that Molesting The Decapitated was released. Not knowing what to do, the band decided it was time to part ways. But due to the overwhelming response from fans worldwide, Devourment reformed minus Brain and adding once again Braxton Henry on guitars and none other than Wayne Knupp on Vocals.

Together they would record one new song entitled Babykiller, which, would be released along with the 3 songs from the "Impaled" demo and the 8 songs from "Molesting The Decapitated". The release was called 1.3.8. No shows would ever be played though and eventually the band faded out.

Ruben was eventually released from his 2 1/2 year incarceration and tried to rejuvinate the band. He eventually recruited various new musicians, played a few shows, but things never really materialized.

A few years went by and Ruben, and original bassist Mike Majewski talked again about reforming the band and finally recording the band's long awaited second album. Eric Park filled in the position of drummer and the band went into the studio of August 2005 and recorded Butcher The Weak. Ruben Rosas took over as sole guitar player in the band, and vocal duties are now handled by former bassist Mike Majewski. The album was released in November of 2005 and went on to gain critical success, as well as praise from Devourment fans all over the world. In 2006, the addition of a new bass player, Chris Andrews (former drummer for Texas based grindcore outfit Kill the Client)completed the current lineup, and Butcher the Weak was completely re-recorded from the ground up with the producer who the band worked with on Molesting the Decapitated, with the new version of Butcher the Weak being released on Brutal Bands Records. Devourment is currently working on their 3rd album to be released late 2008, or early 2009.

Wayne Knupp passed away in 2007 from multiple organ failure.