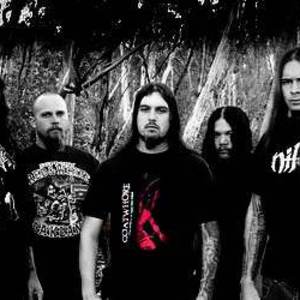 There are mutliple artists with this name: 1) Disgorge is a brutal death metal band from USA. In 1992 Bryan Ugartechea, Tony Freithoffer and Ricky Myers started what was to become one of California's most brutal deathgrind bands. In 1992 they released their first demo "Cognitive lust of Mutilation". Shortly after, Disgorge relocated to San Diego California to establish their name in the underground scene. During the move the band parted ways with bassist/vocalist Bryan Ugartechea. Immediately, new members Matti Way (vocals) and Eric Flesy (bass) filled Brian's position.

1) Disgorge is a brutal death metal band from USA.

In 1992 Bryan Ugartechea, Tony Freithoffer and Ricky Myers started what was to become one of California's most brutal deathgrind bands. In 1992 they released their first demo "Cognitive lust of Mutilation". Shortly after, Disgorge relocated to San Diego California to establish their name in the underground scene. During the move the band parted ways with bassist/vocalist Bryan Ugartechea. Immediately, new members Matti Way (vocals) and Eric Flesy (bass) filled Brian's position.

The band quickly wrote new material for their second demo "95 demo", which was distributed worldwide and received great reviews. Disgorge played many shows throughout 1995 to broaden their fan base. In 1996 Disgorge recorded the first four tracks of "Cranial Impalement" ( CD released by Extremities Prod. ) which wasn't released until recently.

In 1997 Tony Freithoffer and Eric Flesy left the band to pursue other things. Ricky and Matti began looking for new members, which weren't found until late 1998. Diego Sanchez (guitar) and Ben Marlin (bass) of Strangulation (a local death metal band) decided to join the band then signed with Unique Leader Entertainment, shortly after they released their full-length album entitled "She Lay Gutted" in November of ?99. Since the release of She lay Gutted Disgorge has toured worldwide in Europe, North America and South America.

They recorded their worldwide distributed third album entitled "Consume the Forsaken" with a new vocalist, A.J. Magana, who replaced Matti Way in 2001. Disgorge has always set out to play the most extreme music possible and on all three albums they have stayed true to their ways. On their fourth album entitled "Parallels of Infinite Torture" featuring new front man Levi Fuselier & guitarist Ed Talorda they have pushed their limits even farther. With many World Wide tours in the works Disgorge have tortured Japan, Australia, New Zealand, Thailand, Mexico, and Indonesia in support of the new release.

Also many more tours are to come while the band plan on wrinting new material for a next album.


2) Disgorge is a brutal death metal/goregrind band from Mexico.

The band started back in late '93, with the aim of creating the sickest and most brutal band in M?xico. The band's sound was very influenced by the old death metal sound of late '80's? often compared to Grave, Incantation, Mortician, Dismember and Carcass.

Already in 1994, the band released their first demo/rehearsal including 6 songs of a totally nauseous old school Gore Death/Grind, receiving a very good response from the underground that made them to deal with Bellphegot Rec. for the release of their first official studio demo in '95 under the title of "Through The Innards". 4 songs full of Gore and with a more Death Metal influence.

In '96 the band released its 2nd demo "Blood And Pus Emanations", including three odes of destruction of the most rotten and sick Death/Grind, which leaded them to perform their first tour through Central America (Costa Rica, El Salvador, Guatemala and Nicaragua) in coalition with American Line Prods.

"Chronic Corpora Infest" was the band's first full length album, recorded in '97 and including 9 songs, it was first released the same year on cassette format by Perpetual Rec. (mex) and later, in '98, on CD format by American Line Prod., including a more explicit artwork and giving the band a wider exposure in the rest of the world, as well as offering them the chance of doing a 2nd tour through Central America in the same year.

In 1998 the band recorded 4 new songs for their "Promo '98" in search of a new company for their 2nd album. In the meantime, two of these songs were included on a Split 7"EP with Squash Bowels and their demo "Blood And Pus Emanations" was re-released by japanese label Obliteration Rec. with new artwork.

Finally, in '99, DISGORGE signed a deal with the spanish label Repulse Rec., one of the most respected and legendary Death Metal labels in the world's underground. So, by the end of that year, the band recorded "Forensick", featuring George "CorpseGrinder" Fisher of Cannibal Corpse doing backing vocals in one song. In the year 2000, "Forensick" was released on a worldwide basis with an excellent promotion and distribution, shocking the worldwide scene, not only because of displaying one of the most explicit album covers ever, but also because it included 10 songs of the most brutal, heavy and chaotic Death/Grind/Gore ever to be vomited on planet earth.

The band took part in some of the most relevant festivals and tours in M?xico like the Brutal Fest, Devastation Tour and TormenTour, receiving an overwhelming response by the Mexican scene. Now in 2001, the band did the "European Forensick Tour" together with Sanatorium with 35 dates through 14 countries like Czech Republic, Austria, Slovenia, France, Italy, Spain, Belgium, Netherlands, Denmark, Sweden, Poland, Slovakia, Switzerland and Germany. At the same time, "Forensick" was licensed to Necropolis Rec. for the US & Canadian territories, resulting in the strongest distribution and promotion for the band in these countries, although this ended being a total rip-off trick from that label that never revealed any sales figures and consequently never paid anything either to REPULSE and DISGORGE.

In the year 2001 the band released a split MCD with German C.B.T. through brazilian label Lofty Storm Rec. and also took part in various tribute albums to bands like Carcass, Regurgitate, Anarchus and Cannibal Corpse (this one was never released). Their first album "Chronic Corpora Infest" was released in 12"LP format by American Line Prod. on a limited edition of 300 copies including 3 bonus tracks, two from their demo '94 and one from their promo '98. There was also a CD release entitled "Gorelics" through Sade Rec. (mex) including all their demos, EP's, covers and unreleased tracks. Now in 2002, their split 7"EP with Squash Bowels was re-released on CD format with new artwork and bonus tracks of both bands.

The demise of Repulse Records in summer 2002, gave as result the born of Xtreem Music, also leaded by Dave Rotten, so DISGORGE negotiated a new contract with this label for the release of the band's 3rd album "Necrholocaust", that was already recorded back in May. After some delays in the conception of the album's artwork and design, the release date was scheduled for January 2003. This new work includes 8 songs full of total hate and more influenced by the old sound of late 80's Death Metal, still keeping that sonic holocaust and very own essence to which DISGORGE has been loyal through their entire existence.

3) Disgorge is a grindcore band from the Netherlands.

They formed around 1995'. They had a quick spell releasing two demo, then calling it quits. They have since re-joined again and have released a futher two demos and an EP.

4) Disgorge - later changed their name to Egrogsid - was a grindcore band from Australia (Hobart and Tasmania in the earlier days, Melbourne and Victoria in the later days. The band shared members with, played many shows and toured with Warsore - and could be considered 'brother bands', in that respect.

5) Disgorge is a fast hardcore band from Belgium.

Gore Blessed To The Worms