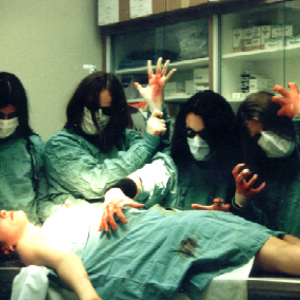 Impaled is a death metal band from Oakland, California. . The bands name is an acronym, standing for: Impaled - Immoral Medical Practitioners And Licentious Evil-Doers. The band was founded by guitarist Sean McGrath in late 1996, who joined with drummer Raul Varela, guitarist Jared Deaver (formerly of Deeds of Flesh and Severed Savior) and bassist Ron Dorn to record their 1997 demo Septic Vomit. Each Member of Impaled is named, also having a nickname as followed: Dr.

In 1998, Leon del Muerte, former guitar player for Exhumed, was added to the line-up as lead vocalist. With the departure of Deaver, Leon took on second-guitar duties in addition to lead vocals. Due to time conflicts regarding tours, Dorn was asked to leave and was to be temporarily replaced by bassist Ross Sewage, who concurrently was playing with Exhumed. Sewage later opted to become a full member of Impaled. Sewage also plays concurrently with the band Ludicra.

In 1999, the band released their second demo, From Here to Colostomy, for which the band gained some recognition. A year later, the band were invited to contribute to a split 7" record with deathgrind band Cephalic Carnage by Italian label Headfucker Records. The band then released their first full-length album The Dead Shall Dead Remain, followed by a tour of the US with Nile and Incantation.

In the same year, the band went on to release a 7" split with Engorged and toured again, this time with death metal bands Vader and Skinless. Soon after the tour, Leon del Muerte departed, to be replaced by guitarist Andrew LaBarre, formerly of Hoarfrost and Prevail.

The new line-up recorded Mondo Medicale in 2002, to critical acclaim amongst metal fans, but also public scrutiny, with the album cover art supposedly being banned in some countries (The album was later rereleased with a censored version of the original artwork). However, in interviews members of the band have stated that the sticker that can be found on some copies of the album proclaiming "Banned in 84 Countries" is merely a publicity stunt. Soon after touring for Mondo Medicale, LaBarre left the band and was replaced by Jason Kocol.

In 2004, the concept album Death After Life was recorded, with production duties undertaken by Trey Spruance of Mr. Bungle and Secret Chiefs 3 fame. It wasn't released until 2005 due to scheduling difficulties with the label.

The band has recorded tracks for tribute albums to both Carcass and Impetigo.

Some of the band members also play under the name Ghoul and have released three albums to date under this moniker.

In 2007, the band signed to Willowtip Records for the European distribution of their new album. The record, entitled "The Last Gasp," was completed in August and released November 5th 2007. Leaked versions of the album appeared on various P2P networks in the leading months, which were a prank by the band themselves and contained "Captain Butt-beard the Pirate" taunting and insulting the listener for their thievery.

The Dead Shall Dead Remain