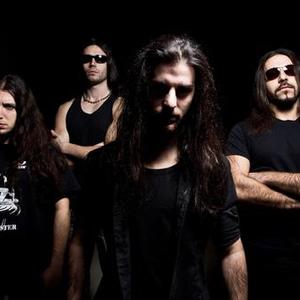 Hour of Penance is a Technical/Brutal Death Metal band that formed in Rome, Italy in 1999. The band has so far released five full length studio albums: Disturbance in 2003, Pageantry for Martyrs in 2005, The Vile Conception in 2008 Paradogma in 2010, Sedition in 2012. Their lyrical themes are based on Anti-Religion, Torture, Morality and Social Issues. Formed back in 1999 Hour of Penance started as a black-death cover band. The sound made by all those incredible bands from Florida, was what H.O.

The band has so far released five full length studio albums: Disturbance in 2003, Pageantry for Martyrs in 2005, The Vile Conception in 2008 Paradogma in 2010, Sedition in 2012. Their lyrical themes are based on Anti-Religion, Torture, Morality and Social Issues.

Formed back in 1999 Hour of Penance started as a black-death cover band. The sound made by all those incredible bands from Florida, was what H.O.P. was trying to emulate. The band began to write songs, combining the sound of their different influences from Europe and USA.

In October 2000, H.O.P. release their first demo, which was recorded in only two days at the Outer Sound Studios (by Giuseppe Orlando of Novembre). The mini-CD is 20 minutes long, and includes the first song H.O.P. ever written, that gave the name to the band. It immediately made H.O.P. well known in Rome (a few times later also in Italy, after some positive reviews by 'zines and webzines), the band had some shows in the city, playing with other metal bands.

H.O.P. enter Outer Sound Studios again in September, 2001 to record a split 7" (still waiting to be released for Warlord Rec.) with Cadaveric Crematorium (Brescia, Italy). Their side includes a new track plus a cover to paying homage to the death metal-gods Deicide: 5.19 minutes of blasting sonic fury! As a [dramatic] oddness, the recording session ended on Sept 11th, just before the terrorist attack on the United States.

In October 2002, the band is officially under contract with the Spanish label XTREEM MUSIC (ex-REPULSE Rec.), and will release the first full-length album Disturbance in February 2003.

What next?! Well, "Disturbance " had a large number of very positive reviews worldwide and became album of the month for the Swedish Nekrologium Webzine and for the Peruvian Metallerium Webzine. The German Possessed magazine claims that the album is the best thing done in Italy since Bud Spencer & Terence Hill's spaghetti western movies... is there any best compliment in the world?!

Fater solving some line up problems, the band started a very intense live tour in the beginning of 2004, and for the second time H.O.P. played outside of Italy: this time the band joined forces with Houwitser, Harmony Dies, Sinners'Bleed, Spawn and Symbiontic for a brutal gig in Wermelskirchen (Germany) on April 24th. A few weeks later H.O.P. supported Disgorge (mex) and Sanatorium at the Brunch Live (Porto d'Ascoli, ITA), Prophecy and Godless Truth in may, and once again outside italy, in august the band took part as Headliner at Mountains of Death Festival 2004 (Switzerland) with band such as Spawn Of Possession and Despondency.

In October the band plays at the third edition of Made In Sickness Fest togheter with malta's death metal combo Beheaded and technical death metal Prejudice.

Beginning of 2005: after two months of hard work in the new 16th Cellar Studio, Hour of Penance unleash their second attack of uncompromising Brutal Death metal untitled Pageantry for Martyrs. The new album (that will be out once again for Xtreemmusic Rec. In may 2005) shows, in 10 tracks of blastbeat Fury and a unrelenting guitar riffing, the high level of songwriting and musiciansanship demonstrated by the band.

The last album of the band, entitled ?Pageantry for Martyrs' won several awards as ?Best album of 2005', even if Hour of Penance it's still considered as an underground death metal band. Thanks to the new album Hour of Penance was definitely consecrated as one of the most stunning act of the European Brutal death metal scene and as the most impressive band from Italy. In This two years the band played loads of gigs outside italy and in some important European festival as the NRW death metal fest in Germany or Kempen death fest in Belgium, following for two dates the tour named Gutting Europe, or headlining the Knuppelnatch fest in Switzerland. Missed the chance to tour with the almighty Nile in September the band finally managed to tour with Krisiun in March 2006 playing shows in Spain, France, Switzerland and Italy. It was one of the greatest experience ever for the band.

After the tour with Krisiun, the band start the works for his next album. In the meanwhile the band took part in one of the most important underground Italian festival, "Grind Your Mother 3"with band as Napalm Death, Sinister, Regurgitate, Leng T'che and many more. In September Enrico, one of the founder member of the band, quits Hour of Penance and in November the band parted ways with Alex Necrotorture. In December a new singer, Francesco Paoli, joins forces in Hour of Penance and in the same month the band entered 16th Cellar Studios in Rome once again with producer Stefano "Saul" Morabito to record 3 new tracks as preview of his still untitled next album. Promo 2007 received a great feedback, as well as the past works of the band, introducing to the audience a different band. Thanks to the promo, Hour of Penance received several proposals from some labels and a short period after the release of it, the band signed a 2 album contract with the legendary Unique Leader rec.
While playing in several gigs and festival in Europe ( as the amazing Death Feast open air, Neurotic DF and others ) the band was still working at its third album entitled The Vile Conception which represents the meticulous work of over a year of songwriting, The band finally entered again the 16th studios in July 2007 to lay down the 10 tracks of its new recording. Hour of Penance third album entitled "The Vile Conception", follower of the 2005 success "Pageantry for Martyrs", will be released next February 23rd via Unique Leader Records.
Showing one of the finest European death metal, "The Vile Conception" marks definitely a step forward in every front for Hour of Penance and represents the result of a meticulous songwriting and research of musical-perfection, an improvement of the trademark which always characterized Hour of Penance style. Fast drumming and technical guitar riffing assault with evil-melodical parts and a fast verbal aggression for over 40 minutes is what you will hear in "The Vile Conception"..a death metal manifesto against those who rule the earth through the power of lies and lead humanity to an inevitable end.