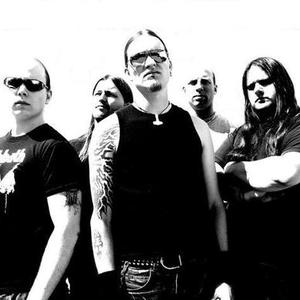 Blood Red Throne started in Kristiansand, Norway in 1998 when D?d and Tchort (while playing in Satyricon at that time), decided to form their own band and show their passion for death metal. Tchort had been playing death metal since 1989 with his band Green Carnation, which was one of the first death metal bands in norway, and D?d had been a huge fan and of the genre since 1992 . Tchort was also the bass player in Emperor in the early 90's and has been involved with bands like Carpathian Forest and Einherjer.

The band soon got in touch with a very skilled drummer living in their hometown by the name of Freddy Bols?, and BRT was born.

Soon after bassist Erlend Caspersen joined the newly formed Blood Red Throne. The band recorded a demo, entitled Deathmix 2000 with Ronni Thorsen from Trail of Tears providing the vocals. This demo got excellent feedback and BRT got offers from labels right away! Finally having recruited long time friend Mr.Hustler as the permanent frontman, the same line-up recorded the debut Monument of Death and released it through Hammerheart Records in 2001. The limited edition included a package called 'The Suicide Kit', which not only contained the actual album, but also a printed razor blade and a poster. The kits were hand numbered in the band members' own blood!

BRT never did any live shows with this line up; Freddy Bols? moved back to his hometown and BRT had to find a new drummer. Espen ?Beist? Antonsen (The Sickening) joined and the band recorded Affiliated With The Suffering in 2002 and this was their last album through Hammerheart Records. The band did two European tours and the Inferno Fest with this lineup and Beist left as they were about to record their first album for Earache Records. With the help from Bernt Moen, BRT managed to record their darkest and most intense album yet; Altered Genesis. Altered Genesis was released in 2005 and after this release, Mr. Hustler had to leave the band due to work commitments and, Vald was handed the microphone. To make things easier, BRT also had to find a permanent and local drummer, and this led to Anders Haave. He joined the band in 2006 and BRT went on a new European tour several live shows unti going into the studio to record their fourth album, (Come Death), for Earache Records. It was released in 2007 and by the end of the year they did another European this time with Divine Heresy. 2008 was a slow year for BRT on the live front, but the band took the time to write the material for their next album and in March 2009, BRT finished recording and mixing the 5th studio album, entitled Souls of Damnation. The album will receive a European release on June 1st with the US to follow on June 30th. The album was recorded and mixed at Studio Deadline with Valle Adzic as engineer. The studio album marks the band's 10th anniversary and will be released in a special limited edition featuring bonus songs and a DVD to celebrate this. Blood Red Throne will headline the opening day of the infamous Inferno Festival taking place during the Easter holiday, in Oslo, Norway. The band is also scheduled to play several summer festivals and is prepared to lay Europe in ruins in support of the new album as well as head out on a South American and North American tour in 2009/2010.

Union Of Flesh And Machine

Affiliated With the Suffering

A Taste For Blood