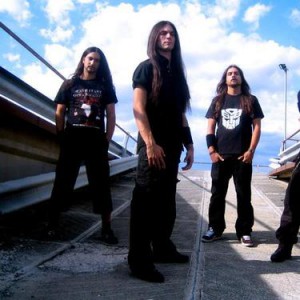 Fleshgod Apocalypse is a technical death metal band from Rome, Italy formed in 2007 by Hour of Penance member Francesco Paoli (Drums/Guitars/Backing vocals) , Christiano Trionfera (Guitars) and Paolo Rossi (Vocals/Bass, Promaetheus Unbound). Francesco Struglia joined the band after on Drums but left in 2008 due to personal interest change and other commitments. The band was previously known as the death/thrash metal act Tyrannic Ethical Reconstruction.

The band self-released their demo Promo '07 in August 2007, which lead to them being signed to Neurotic Records. The two songs included on the demo were also released in 2008 on the split album The Da Vinci Death Code with countrymen Modus Delicti, Onirik and Septycal Gorge.

The band has supported major artists on tour including Behemoth, Origin, Dying Fetus, Hate Eternal, Suffocation and Napalm Death. In late 2008, they started to work on their debut album and left Neurotic Records as they wanted to progress as a band. They were picked up by Willowtip Records on the 19th December 2008.

The album "Oracles" was released in Europe on the 30th of March 2009 by Candlelight Records and worldwide on the 21st of April by Willowtip Records.