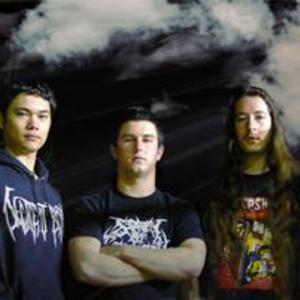 ARKAIK was formed in Canyon Lake in 2004 by Chance Strickland (guitars) and Jared Christianson (vocals) with the intention of creating innovative and creative death metal to take extreme music to the next level. After various lineup changes, they met Eric Cohen (bass guitar/backing vocals), who now also contributes to the writing process. The band later found Craig Peters (Lead guitars/backing vocals), who fit the position perfectly by adding various guitar harmonies and his own style to the musical composition.

After a rotating door of drummers, they met current drummer Keith Roylance, who's attitude and drumming ability brought the band to a whole new level.
In early 2009 the band released a promo with their current line up. Just a couple of months later the band signed a 2 album deal with Unique Leader Records. Since then, Arkaik has shared the stage with bands such as Dying Fetus, Decrepit Birth, Necrophagist, Suffocation and much more. In July the band entered SeahorseSound Studios with engineer Samur Khouja to begin recording their debut album "Reflections Within Dissonance". The album was then mastered by Stefano Morabito of 16th Cellar Studios. The album consists of 10 tracks that blend brutality, technical fret work, sophisticated lyrics, creative bass lines, memorable grooves, powerful vocals, solos and much more!


In September 2010 bassist Eric Cohen decided to leave the band to pursue other interests. Stepping in to fill the spot is former Brain Drill bassist Ivan Munguia. The band just finished up their first US tour in late August and are embarking upon their next tour. They were hand picked by The Black Dahlia Murder to join them on the US/Canadian leg of the Deflorate tour.